Mystery in the Wilderness part 2 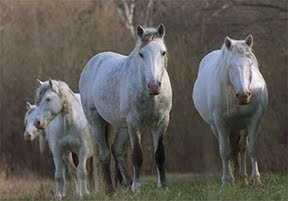 A mist floats between the hills, gray-brown with evergreen patches, where Highway 19 winds north of Eminence. A gravel road veers off to the right — there is not a single paved road in Shannon County that is not federal or state-maintained. The road, graveled five years ago to give visitors easier access to the wild horses, cuts a narrow path down a thickly wooded slope to a pasture in the hollow of the hills.

They are bigger than most horses and appear more powerful. Their ribs do not show. Their tails have never been cut and almost touch the ground. Their manes are long and matted, peppered with burs from the brush.

The horses rest with their hind legs together, never straying far from the sanctuary of the wooded slopes that rise like walls around the valley. The filly, only 3 days old, clings to her mother’s side.

The horses spend much of their time in thick woods, one reason that finding the missing animals has been so difficult.

The Broadfoot Bunch is one of four loose and shifting herds in the wild horse population. Others include the Cornfield, Grassy and Shawnee Creek groups, plus "a few stragglers," Smith s 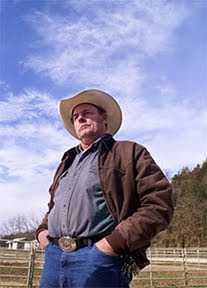 The horses killed or missing were all from the Cornfield Bunch; its numbers have been reduced from 13 to five.

No one knows how long the herds have roamed the hills around Eminence. The most common theory holds that they are descendants of farm horses that escaped during the Depression. Others, however, say the herds date back much further.

"You ask the oldest person in Shannon County, and they’ll tell you there have been wild horses here as long as anyone can remember," says Shannon County sheriff Butter Reeves.

Smith says the horses seem to be descendants from Appaloosas and Arabians, "but there’s no pedigree on them."

The horses had free reign over much of the county when farmers held open range in common. Shannon County was the last in the state to fence its open range, but when it did so in the 1960s, the herds still had more than 100 square miles of wilderness to roam. Almost half of Shannon County is national forest, scenic waterways or other government-protected land.

The Broadfoot Bunch takes notice of two local men photographing them from 100 yards away; the stallion immediately positions himself between the intruders and the foal. The mares form a tight circle around the newborn. Though locals talk of getting within 20 feet of the herd, the animals are skittish these days.

Made nervous by the visitors, they break into a gallop, their manes and tails flowing behind them. One by one, they vanish into the brush, the lead mare in front and the stallion defending the rear.

The National Park Service in 1989 pushed to remove the horses from the area, fearing the wild animals would damage the park and noting they were not native to the area.

"They put a notice in the newspaper, asking for bids for rounding up the horses," says Roger Dillon, editor of the town newspaper, the Shannon County Current Wave. "That’s what got people’s attention and got the ball rolling."

"They considered them feral animals," says Richard Wilkins, one of the two area residents who sued to block removal of the horses. "They said horses cause bank erosion, when they cross streams and such. But tourists cause a lot more damage than that — horses don’t leave beer cans lying around."

Wilkins and his neighbor Rolland Smotherman, who often rode together to see the horses, filed an injunction to stop the department. They also charged the parks department with using traps to catch the horses, a charge the agency denied in court.

Wilkins and Smotherman won their c 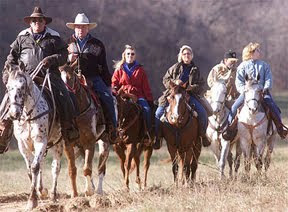 ourt case but lost on appeal in federal court.

"It kept rolling around in the courts like the presidential election," Smotherman says. Finally, the U.S. Supreme Court refused to hear the case.

But the wild horse supporters would not succumb. Smotherman says he and Wilkins wrote to "every government official they thought could help" and found an ally in their U.S. representative, the late Bill Emerson.

"We also gave it a lot of coverage, along with the West Plains Quill and others," Dillon says. "Once it was all over the papers, the thing kind of snowballed."

On Oct. 6, 1993, hundreds of wild horse supporters drove in a caravan from Smith’s trail to the office of the parks department in Van Buren, 32 miles away.

"We headed out from here bumper-to-bumper from Eminence to Winona," Smith says. "When the first people were getting to Winona, the last people were leaving here. That’s 11 long miles of cars and trucks."

The riders drove to Van Buren with their horses in tow, Thompson says, then rode on horseback into town, where thousands of supporters had gathered.

"When we got to Van Buren, there was a gob of folks from everywheres," Smith says. "It was a pretty good deal. They said we couldn’t block the highway, but we did. We blocked the whole damn town. There was more people on horseback than the town could hold."

The day after the protest, department superintendent Art Sullivan postponed the horses’ removal.

In 1995, Emerson sponsored legislation in Congress to save the herds, winning support from U.S. Sens. Kit Bond and John Ashcroft. The bill capped the herd at 50 — there have never been more than 40 — and commissioned the Wild Horse League to maintain them. Congress passed the bill overwhelmingly, and President Bill Clinton made it law in 1995.

On Nov. 16, a camper in the Ozark Scenic Riverways told the sheriff he had passed two deer hunters who said they had seen dead horses. A mare and stallion from the Cornfield Bunch had been shot in the gut.

Two sheriff’s deputies and a state conservation agent inspected the scene that day but found no evidence of the killer. Two days later, someone returned and shot the mare’s colt as it lingered around its mother.

As law enforcement agencies and locals searched, the news grew worse. In early December tourists who got lost riding Smith’s trail found the bodies of three more mares near Colley Lake, half a mile from the first three. The horses were so badly decomposed that Reeves believes they were probably shot around the same time as the others. 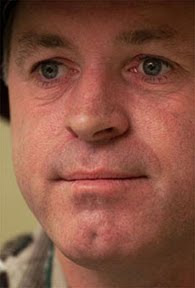 At Reeves behest, the Missouri Highway Patrol flew a helicopter over the area twice with a local farmer who knows the horses well. They found nothing and probably will not fly again, he says.

"The terrain out there is so rugged and brushy, and the canopy in areas so heavy, that they could be laying a short distance from you and you could overlook them," Reeves says.

Four slugs from a high-power rifle were found, Reeves says, and they are being examined at a ballistics lab.

While the horses were shot during deer season, Reeves is certain the killings were intentional.

"Some of the horses were brown, some were white," he says. "They were shot from a close range. There’s no way anyone mistook them for deer."

"Whoever it was, they knew animals — they knew the colt would come back to its mother," says one trail rider who would not give her name. "It almost seems like whoever it was had at least a little bit of a conscience, not wanting the colt to starve."

But Reeves says shooting the colt "was just cruelty. I don’t think it was out of kindness — the colt was old enough to make it on its own."

Reeves believes the colt ran from the gunshots and that the killer came back to the spot again and again until the colt returned.

Bond calls the killings "a despicable tragedy, absolutely senseless. The people in the region have worked to protect the horses, and to just slaughter them makes no sense."

Chris Ward, acting superintendent of the parks service, says at the league meeting that he hopes to solve the case within a week. Reeves says his office has been "swamped with calls" about the killings, from local families to bounty hunters offering their services.

The morning after the meeting, Reeves met with agents of the Department of Conservation and the National Parks Service. "We have some leads that are coinciding," he says.

"These horses have become a part of Shannon County’s heritage, part of our culture," Reeves says. "Not just for Shannon County people, but for the million and a half people who float the rivers and get to see them every year. We have several thousand people who come here a year camping, hiking, bicycling or whatever. They get to see these horses also. So these are their horses, your horses, everybody’s horses."

There are few strangers in Eminence, a town of 614 people where friends and enemies see each other every day. The vast open space that surrounds the community somehow creates closer quarters.

At the T&T Diner, local folks sit with their children or neighbors, most in jeans or hunting fatigues, and talk about everything from Florida ballots and environmental issues to hunting season and local gossip: Tonight’s best tidbit is about the two teenagers who got into a fist-fight down on Main Street the day before.

No topic, however, is more popular than the wild horses. Many residents say they see the horses almost every day, but the experience never grows old. An hour’s conversation yields a dozen or more rumors about the killings, with fingers pointing in all directions. Some residents blame hunters, others blame farmers, city-dwellers, drunks or local teenage troublemakers.

Dillon calls these theories "an insult to locals, city folks, deer hunters, kids and drunks." The killer’s actions, he says, demonstrate "a certain slime-ball mentality that will not be forgiven nor forgotten in these parts."

It’s true the wild horses are an important attraction in a county where the average income is $11,000 a year and tourism is the primary industry. The major industries that once supported the county have dried up, Reeves says.

"The mining is gone now, the timber is gone, the railroad is gone," he says. "But we still have the horses."

Still, the herds are much more than an economic asset. They are a symbol, to locals and to tourists alike.

When advocates won federal protection for the horses in 1995, U.S. Rep. JoAnn Emerson, who succeeded her husband in Congress, praised the victory. The horses, she said, are "a living symbol of the people’s wishes vs. the federal bureaucracy."

The residents’ love for the horses is rooted in a deep current of regional pride. Dillon says the animals, and the pursuit of whomever is killing them, have become a focal point of this Ozark community.

"People in this town are divided on a lot of things," he says, "but they are united in this."
Posted by Brian Kaller at 08:46

What a well written piece - but how utterly incomprehensible that there are people capable of this. Very distrubing.

I had to search this and although I found little, it seems someone was apprehended? Was there any understanding of why?

BTW - I am trying to get a photo of the ice cutting machine in the nearby pond - but so much rain has made the climb down to the pond treacherous and the water murky so the under water parts are not visible. I shall wait for less fallen leaves and more sun and try again for photos. It occurs to me that understanding the design of such a machine could be useful right?

Thank you. I believe someone was aprehended after about a year, but I'd have to look up the details again. I don't know if anyone will ever know why.

Sure, I'd like to see it -- is it a motor-powered device or a manual tool?