Mystery in the Wilderness 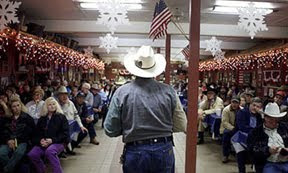 EMINENCE — On a stark winter night, about 120 horse riders gather at the meeting hall, their worn cowboy hats brushing the paper snowflakes that hang from the ceiling. Most monthly meetings of the Missouri Wild Horse League draw a dozen or so people, but tonight the hall is packed.

The folks who have gathered are among the thousands who come every year to see the herds of wild horses that roam the Ozark hills. Now, in the wooded wilderness outside the hall, someone is shooting the horses and leaving them to die.

Cowboys and tourists listen attentively at the meeting. Tears stain at least two weathered faces. Some of these people had fought for years to get the horses federally protected, had marched in protest to keep them safe and had successfully taken their case from Shannon County to the U.S. Capitol and the White House.

"I know what everyone’s thinking," says Elmo Thompson, the 83-year-old president of the Missouri Wild Horse League. "Do we know who killed the wild horses? If we did they’d be in jail, and you’d know about it."

Jim Smith, owner of the Cross-Country Trail Ride and longtime league member, recounts the grim details. Of the fewer than 35 horses that remain in the hills, six have been killed, probably within two days. Two horses remain missing, and hope of finding them alive grows slim.

Federal and state agencies are working with the sheriff, Smith tells the group, and the Missouri Highway Patrol scoured the area twice by helicopter, to no avail. 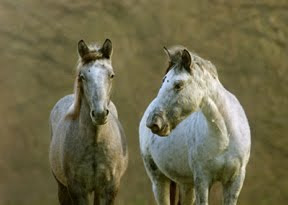 The reward for the arrest and conviction of the killer already stands at $1,000, and the league collected another $1,700 in donations at the meeting.

The evening is not without good news for the league. Smith announces that a foal had been born two days earlier to the "Broadfoot bunch," the herd often seen in nearby Broadfoot Field. And a 3-year-old stallion is ready for adoption — herds have only one male at a time, and the league gives the others away.

Local residents formed the Wild Horse League about 10 years ago to protect the only wild horses in the Midwest. The group now has more than 1,000 members representing all 50 states and five foreign countries, Smith says. Donations are pouring in, with people sending checks "from five to 1,500 dollars," he says.

"We all love the wild horses. We all miss them," Thompson says. "All the local people here cherish the wild horses, like I do mine at home."
•
That same night, visitors from across the country surround a campfire. There is only one topic of conversation. Voices crack as the visitors — men and women, elderly and children — talk about the killer and the appropriate punishment.

"How can someone hurt an animal that’s wild and free like that?" asks Melissa Page of Kentucky. "To a horse person, that’s the lowest form of life."

Some people travel thousands of miles several times a year to ride the trails here. Smith bills his land as the site of the largest riding trail in the world in one of the largest and most sparsely populated counties in the state.

"We haven’t got much left that is free in this country," Tony Merrick of Kentucky says. "The horses have been here longer than any of us."

"Civilization’s running out, the population’s increasing so fast," Page says. "This is the last freedom we’ll ever see. It’s one of the incentives to keep some things pure."

The herds lure Paula Fivecoat of Arbyrd to Shannon County about a half-dozen times a year.

"It’s not a ride unless you’ve seen the wild horses twice" within a week, she says.
But Merrick’s wife, Mary, says the killings have darkened the mood of recent rides. Many of the riders that day heard faraway gunshots on the trail and feared the killers had returned.

"Seven years I’ve been coming here," Page says. "I’m afraid next year we’ll come back and there will be none left."