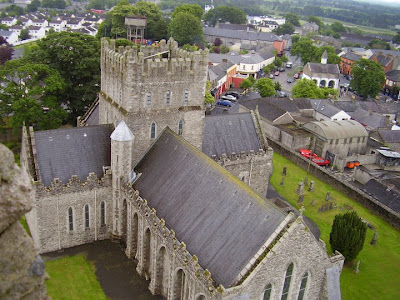 Transition Town Kildare is off to a great start, and I wish every town could see meetings like the one I saw tonight. The event at Aras Bridhe church drew a large crowd from a small town, including parents, schoolchildren, elderly villagers, nuns and farmers, and many people asked tough questions about a future without oil.

Event organizer Theresa Carter -- an amazing woman who spun the Kildare Transition Town group out of our group, FADA -- gave a comprehensive rundown of peak oil and climate change that brought listeners from zero to well-educated in less than thirty minutes. An elderly nun from the parish also read a brief poem about caring for the creation.

But the highlight of the evening came when Trevor Sargent, the former head of the Green Party and now Ireland’s Minister for Food and Horticulture, gave an inspiring speech about Ireland’s post-oil future.
Sargent is an impressive man -- he has begun his own Transition Town initiative in Balbriggan, and helped promote the release of Rob Hopkins’ Transition Town Handbook in the first Transition Town of Kinsale, Ireland. He has recently called for every school in Ireland to grow its own food. He might be the only world leader to ride his bicycle to work most mornings. Tonight, he spoke about peak oil and climate change in a way that was both brutally honest and inspiring.


* It was ecological destruction that caused the collapse of Easter Island and the once-Fertile Crescent, according to Jared Diamond’s book Collapse.

* Most of the food we buy off supermarket shelves keeps so long because no living thing, other than us, are willing to eat it.

* In the last 15 years, Ireland has lost 15 percent of its farms to development. Every farm lost is also a set of traditions and skills that no longer outlive the aging farmer population.

* Potato sales in Ireland have gone down, but sales of small waxy potatoes – which do not grow here, and must be imported – are up an amazing 20 percent. Apparently it is because they do not have to be peeled, and most people cannot be bothered to peel their own potatoes.

* We need not just a return of local gardens, but local abattoirs and local industries.

* Ireland’s 1926 Acquisition of Land and Allotment Act, which got rid of the workhouses when the nation became independent, compels local authorities to give people access to land for growing food, and more communities could invoke this this law to force local food production.

* In the next few decades, the world needs to drop oil or the planet will drop a lot of people.

* The French Revolution was partly spurred by food riots, and the young officer sent to put down the riots was named Napoleon Bonaparte. The prospect of food riots haunted him for the rest of his famous career, and when he became Emperor, he dictated that every mayor of every town was responsible for creating and maintaining a farmers’ market – a legacy that France has enjoyed ever since.
Photo: Kildare Town
Posted by Brian Kaller at 01:46