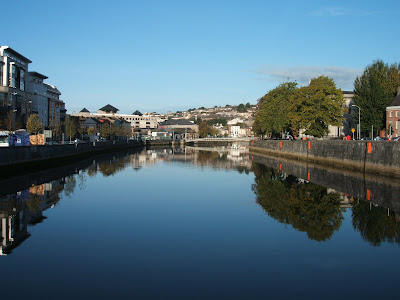 I wrote this article for Permaculture magazine last year, and I think the statute of limitations has run out for reprinting it. It was an amazing experience, not just for hearing the speakers but for having a chance to sit and talk after hours, or at least meet, with peoople I have always admired -- Rob Hopkins, Albert Bates, Julian Darley, Jeremy Leggett, Colin Campbell and many others.

Rarely does an event bring together oil industry leaders and community activists, an English lord and an American farmer, Chinese scientists with the former CIA head -- all to discuss the future of oil-powered civilization.

The consensus: brace yourself, both on fossil fuels and climate change.

“The peakists have won,” said former US Energy Secretary James Schlesinger, addressing the sixth annual convention of the Association for the Study of Peak Oil. Oil industry scientists and business leaders, he said, increasingly admit that an oil crisis is coming, although his and many governments remain in denial.

“Until we get the engagement of the public, we are not going to be able to grapple with this issue,” he said.

Most experts believed peak is imminent. Oil industry executive Ray Leonard suggested the current plateau of oil production may last another decade before declining, while Petroleum Review editor Chris Skrebowski predicted the plateau would last a few more years and then peak around 2011. Talisman Energy CEO James Buckee was perhaps the grimmest, said that “we are at peak and looking at an exponential decline” in the coming years.

Despite this, “don’t expect too much progress in relation to containing greenhouse gases,” Schlesinger bluntly told the gathering. The giant populations of China, India and Indonesia are escalating their energy use, he said, and will likely try to extend their fossil-fuel credit with coal or bio-fuels.

Other peak oil experts have been more hopeful about climate change; ASPO member Kjell Aklett, for example, has said that oil will run out too quickly for doomsday climate scenarios to happen. His 2003 report, however, did not take increased coal use into account.

Nate Hagens of the University of Vermont’s Gund Institute gave another reason for opposing bio-fuels, noting that supplying much of the world with current levels of fuel production would require turning much of the world’s arable land over to fuels instead of food production. He also noted that as the climate changes, droughts are likely to reduce the crop production needed

Many speakers, however, offered more hopeful signs: new developments in electric cars, increases in the use of solar and wind power, and a revival of local and regional sustainability. Airtricity CEO Eddie O’Connor promoted a pan-European grid of wind turbines off the Atlantic coast that could offer a constant supply of electricity, while other scientists promoted a revival of nuclear energy.

Others are making progress at the local level. Community activist Rob Hopkins described how his town of Totnes, and dozens of other communities around the world, are becoming “transition towns.” Totnes residents, he said, are organizing local gardens, “re-skilling” for a post-oil world, and interviewing elderly neighbours about traditional ways of life.

The gathering was a milestone for the seven-year-old ASPO organization, its first conference since “peak oil” theory received mainstream media attention in the UK and US, and since the price of oil hit an all-time high.

Peak oil theory holds that oil production follows a predictable curve, rising and then falling as growing demand outpaces the dwindling supply. With some variation, oil production of most countries have followed this curve, first proposed by oil geologist M. King Hubbert in the 1950s.

Oil crises were difficult enough in the 1970s; since then traffic and suburbs have exploded across England and Ireland, further tying prosperity to fuel. Cars can be made electric; however, air travel will remain dependent on oil, and speakers at the conference predicted that industry would contract in the decades ahead.

Another problem with an oil crisis is that the Western world has largely replaced its plant-based products for oil-based ones. Business suits, gelatin pills, computers, car dashboards and a million other tiny items are made of plastic, derived from fossil fuels.

Finally, world agriculture is dependent largely on tractors and pesticides – innovations that allowed world population to double in the last 50 years, but depend entirely on fossil fuels.

Hubbert was initially ridiculed for his prediction that the U.S. oil supply would peak in 1970, but was later proven correct. Geologist and Cork resident Colin Campbell was similarly ridiculed in the 1990s when he revived Hubbert’s ideas and predicted a global oil peak in the early 2000s. Seven years later, however, as the elderly scientist stood before the cheering crowd, he smiled like a man vindicated. 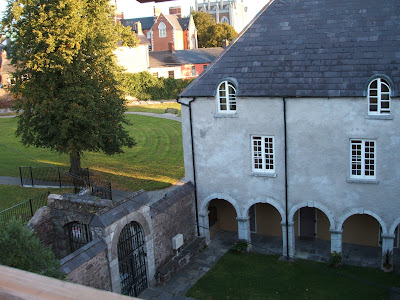 Top photo: the view from one of the bridges across the middle of Cork. Bottom photo: The view from the youth hostel I stayed at. I had worked out on a map the nearest cheap hostel to the conference, thinking it would be a short walk. I had not taken into account the topography of Cork, and that much of the walk would be up what could only be called a cliff.
Posted by Brian Kaller at 23:26