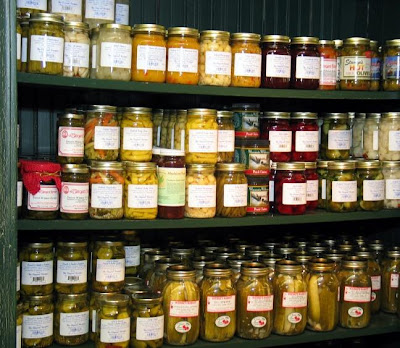 Almost all people, whether Irish villagers, Aboriginal tribes or desert nomads, used to preserve food during the non-harvest majority of the year, and had developed sophisticated methods by trial and error over centuries. The specific methods changed with culture and climate, but people knew how to dry, pickle, salt, bury, smoke and ferment, just as people used to know how to raise food, build shelters, birth babies, raise children and bury their dead. It is only in the last couple of generations, here in the West, that we have forgotten all these things, and expect to be taken care of.

Today, a shocking percentage of people -- a majority in America - don't cook at all. Seventy percent of Americans are overweight, and a recent poll in England found that a third of food was thrown away uneaten. That constant stream of cheap and unhealthy food, though, is going to end soon, and we will have to return to growing our own and stretch most of the harvest long past harvest time.

Another common method is dehydration. Most people are already familiar with several such foods: raisins and sun-dried tomatoes, herbs, seasonings like garlic, and of course bulk grains and beans. Some parents have discovered the advantages of dried fruit like apple rings or fruit rolls, which children often love and which are much more nutritious than candy.

Drying meat into jerky is an old method of storing protein, and other people dehydrate chopped vegetables as soup starters. Nettles or dandelions can be dried for tea. The Japanese dry seaweed to use in soups, and we here in Ireland pay high prices for it at sushi restaurants, yet ignore the thousands of tonnes of edible seaweed on our own shores.

Your climate will make some kinds of preservation easier or more difficult -- our damp climate in Ireland means we have to watch out for mould when drying, and you may need the help of your radiator or oven. When we dry herbs, for example, we turn the oven to the lowest setting and leave the door slightly open.

On the other hand, we have very little snow or even frost here, and this is a good climate to simply leave things like parsnips, celeriac or other root vegetables in the ground through the winter, and yank them out as you need them. Some people put straw or bags over them to protect from frost, or pull them from the earth and store them in sand.

There are several other well-known forms of preserving – canning, pickling, salting, smoking, preserving in jams, in oil, in liquor – that I'll talk about later, but these methods are a good place to start.
Posted by Brian Kaller at 12:02