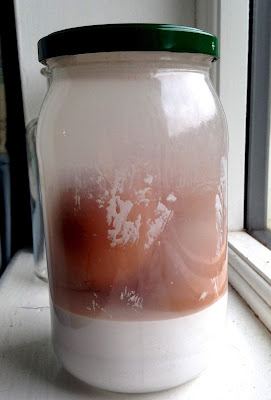 No matter what else you have in your kitchen, you probably have eggs. Whether you boil or fry them for breakfast, whisk them into egg-drop soup, bake them into pastries or mix them into batter, eggs provide one of the simplest and yet most versatile of foods, prized the world over as a rich source of easy protein.

If you raise your own chickens, moreover, you have a ready source of eggs, as well as fertiliser and comedy relief. Hens convert your leftovers into your next breakfast, keep your garden free of pests and mow your lawn for free. Other animals can do some of these things, but not many of us have the time, space or will to manage a suburban herd of sheep or swine, or to slaughter them in the garage. Hens, however, require little space or maintenance, and turn any home into a homestead.

They lay eggs seasonally, however, speeding up in summer and slowing in winter. You could give them more indoor light or Vitamin D supplements, but they cost money and interfere with the chickens’ natural cycle – and saving money and being all-natural are two of the most popular reasons for keeping backyard chickens in the first place.

Another way would be to collect the extra eggs in summer and preserve them through the winter. Eggs can be preserved in several ways; one, well-known to pub patrons here, is to pickle them. A typical recipe involves hard-boiling eggs and removing the shells, and then creating a pickling solution of cider vinegar, small amounts of salt, sugar, herbs and spices. Bring the mixture to the boil, then simmer for five minutes and pour over the eggs – they should keep for at least a few months.

You can also soak the eggs in a solution of sodium silicate, known as isinglass or water-glass. One popular recipe from a century ago recommended dissolving sodium silicate in boiling water, to about the consistency of a syrup (or about 1 part silicate to 3 parts water). The eggs -- as fresh as possible, and thoroughly clean -- should be immersed in the solution in such manner that every part of each egg is covered with the liquid, then removed and let dry. If the solution is kept near the boiling temperature, the preservative effect was said to be much more certain and to last longer.

Perhaps the best and longest-lasting way, however, is to preserve eggs in limewater. No recipe could be simpler; take fresh raw eggs in the shell, set them gently in a jar, and pour in a simple lukewarm mix of tap water and lime powder. I’ve done this with our eggs, and they lasted for up to a year and remained edible.

“Lime” here means neither the citrus fruit nor the tree, but refers to calcium hydroxide, a white powder derived from limestone. For at least 7,000 years humans burned limestone in kilns to create the dangerous and caustic “quicklime” (Calcium oxide), and hydrated that to create lime powder (calcium hydroxide). Sumerians and Romans used it as a cement, while farmers mixed it with water to create whitewash, tanners used it to remove hair from hides, gardeners to repel slugs and snails, printers to bleach paper.

Perhaps most importantly, farmers here in Ireland spread lime over their boggy fields to “sweeten” the acid soil and increase crop production as much as four-fold. For hundreds of years until the mid-20th century, lime supported a vast and vital network of village industry in this part of the world-- County Cork alone was said to contain an amazing 23,000 kilns, or one every 80 acres.

In his 1915 monograph “Lime-water for the preservation of eggs,” Frank Shutt describes a series of egg preservation experiments at an experimental farm in Ottawa, which found lime-water to be “superior to all other methods” – how, he didn’t say.

When I first tried to preserve eggs in lime-water, I simply mixed equal parts lime and water – which did no harm, but most of the lime simply settled to the bottom. It turned out a fraction as much lime would have sufficed – Shutt says that water saturates with lime at 700 parts water to one part lime, but adds that “owing to impurities in commercial lime, it is well to use more than is called for.” In any case, if you use more lime than is necessary to saturate in water, the rest simply condenses out.
Since exposure to air causes more lime to condense over time, some articles recommend keeping the container sealed, either in a Kilner jar or by pouring a layer of oil over the top. I kept mine in an ordinary mayonnaise jar, and they kept fine for a year.

Eggs kept this way do come out with their whites darkened slightly, and with a faint “musty” smell like old clothes. It does not, however, have the unpleasant smell of a rotten egg – believe me, you won’t mistake one for the other. The difference can perhaps be compared to that of rehydrated milk from powder vs. fresh milk – the former is not inedible, just slightly different than expected. As Shutt puts it, nothing “can entirely arrest that ‘stale’ flavour common in all but strictly fresh laid eggs.”

I’m not aware of an upper limit on how long eggs could be kept this way, but I would not recommend going longer than several months to be on the safe side. Several months, however, still allows the homesteader to continue harvesting eggs through the winter.

Shutt recommends keeping the water at a cool temperature – 40-45 degrees Fahrenheit, or five degrees Centigrade, to help the preservation. That’s the temperature of a refrigerator, but a cellar or underground storage container would probably be fine. I kept mine at room temperature during an Irish year, where the temperature ranges from freezing (32F, 0C) in winter to lukewarm (75F, 25C) in summer, with no ill effects. Some old texts say to boil the lime-water, dissolving as much of the lime as you can and letting it cool before immersing the eggs; that might be slightly preferable simply to maximise the amount of lime dissolved or to sterilise the water, but I tried it both ways and noticed no difference in quality.

Some old recipes recommend adding salt to the eggs, but I tried it with and without salt and found that it didn’t make a difference, and neither did Shutt a century ago. Still other 19th-century recipes mixed the lime with salt-peter and even borax, but I would not try those until I had confirmed their safety.

Experiments like this might seem pointless when we have refrigerators, freezers and a convenience store down the road. Many of us, though, like being able to do things ourselves, with simple ingredients, for a lot less money than processed food at the store would cost. Money and electricity, moreover, are less certain than they used to be; I know many friends who have lost jobs, or whose power now goes out regularly. The results are not as apocalyptic as most people imagine -- crises are rare, and even in a crisis life goes on – but in an emergency your family or neighbourhood would benefit from someone who knows how to do things the old-fashioned way.