Christmas during the Forgetting


Every year my daughter was growing up, I brought her to the Wren Day at the local forest, and was pleased to be part of a ritual that dates back hundreds, if not thousands, of years. Now that my daughter is a teenager, we haven’t been back in a few years, but I returned last year to visit it again. I was crestfallen, then, to find that the festival was cancelled … they couldn’t get enough people to come, they told me, in order to pay for the insurance they now need to pay.

I should explain that wrens are little songbirds that remain here through the winter, and their ritual here comes the day after Christmas. On that day we and hundreds of our neighbours would gather in the local woods, and in a clearing with park benches and a tea shop, musicians played traditional Irish music while locals gathered with hot drinks around fires or danced to the music, and children gathered around for the “Hunting of the Wren.”

In the ritual, local men dressed up as “wren boys” -- which for our group meant looking like Robin Hood’s Merry Men – gathered around a statue of the songbird. The wren, the men explained to all the gathered children, was sacred to the Celts – the old Irish name for it, dreoilin, means “the Druid bird.” One day a year, local “straw boys” – dressed like haystacks, their identities concealed -- hunted the wren as a prize, and the Wren Boys swore to protect the bird.
As the musicians played in the background, however, and as the children listened wide-eyed to the Wren Boys tell their stories, a group of Straw Boys snuck up behind them, hitting sticks together menacingly, grabbed the wren and ran off. The children erupted in delighted outrage, and the Wren Boys led hundreds of local children in a chase through the woods until they retrieved the bird. Eventually, the two sides came to an understanding, shook hands, and placed a small crown on the statue’s head, declaring the wren the King of Birds.

A friend of mine who specialised in folklore said the slaying of the wren meant the slaying of winter, and the pact to accept and cherish it meant the acceptance that winter would return – an important detail where we live, a thousand miles from the Arctic Circle where the winter nights are long and dark. In some eras, when Irish customs were being stamped out, the ritual had to be carried out in secret, but they did so anyway, so devoted were they to keeping it alive. Now, our local Wren Day is gone.

Of course, other communities will likely still celebrate it, but I suspect fewer every year. This is one of hundreds of ways in which the traditional, local and national cultures have been gradually steamrolled away by the mass pop culture of Hollywood.

I realise that I’m complaining about the loss of a tradition I didn’t grow up with myself, but the same is true of local culture in my native USA. Songs of the Appalachians and Ozarks, the rituals of towns and clans, are more and more preserved in amber by aficionados or tourist boards rather than lived by children, while family traditions grow more homogenized and dictated by the mainstream media, more focused on buying things quickly and discarding them. The same process has happened across Europe and, I’m told, non-Western countries where children are raised now by screens rather than blood.

In each of those places – in every place we have been human – mothers and fathers, aunts and uncles, teenagers and children gathered around campfires and hearths, around tables and altars, and shared the songs and stories that made them who they were. They passed down skills and dishes, rituals and holidays. In more and more places around the world now, only the older people remember such things, while the kids play video games or watch Youtube memes, their bodies sitting next to their grandparents but with an interior world that would be alien to their forebears.

Of course, we’ve done this with holidays as well, so that all the festivals people here used to celebrate to mark the passing of the year have disappeared in the last few generations. Mention May Day, Lughnasa, Midsummer, Twelfth Night or to people these days and you get blank expressions – except the last two as titles of Shakespeare plays, among the few who know Shakespeare anymore.
A few generations ago, a neighbour tells me, local children used to gather and dance around the May Pole in a field near us; today, I doubt any of the local children would know what May Day was, and the same could soon be true of Wren Day. A half century of Hollywood has done for this country what centuries of starvation and imprisonment could not.

Nowhere is this more true than around Christmas, which has metastasized from a holy day into a shopping season. For only a few weeks lamp-posts and cubicles grow plastic boughs and wreaths, and normally functional roofs sport enough lights to be seen from space. Radio stations put aside their normal playlists to endlessly repeat a handful of Christmas-related rock ballads over and over. Haggard faces jam the malls and shopping districts, news announcers track the spending numbers like a telethon host, and grim office ladies start aggressive campaigns to cover every surface with coloured cardboard and festive glitter.  If you’re like me, you want to boycott this seasonal magic as much as possible.

Don’t misunderstand; I cherish my own memories of Christmas, love the seasonal spirit and can carol with gusto. For that reason, though, I ration my exposure to the season; the decorations become a backdrop after the first time you see them, inspiring songs quickly grow annoying, and enforced spending leeches the joy from giving.

The radio and television floods us with images of how our holiday is supposed to be: we are supposed to eat too much, drink too much, spend too much and listen to the endlessly repeated holiday songs, whether we actually enjoy these things or not, in the name of tradition.

But most of these customs are not the real Christmas traditions, and many were just created as marketing gimmicks by corporations. Only in the 1930s, for example, did a Coca-Cola advertising campaign cement our modern version of Santa Claus in the public mind, with a red-and-white colour scheme to match their product. Some version of Father Christmas has existed before then in other forms, of course, but even in the early 20th century ago people depicted him in a variety of outfits, often a green robe. He was often shown as thinner as well – perhaps it’s not a coincidence that his obesity began when he started advertising soda pop.

Some of the Christmas songs we treat with reverence are not particularly old either, and some of them were also marketing campaigns: "Rudolph the Red-Nosed Reindeer," for example, was invented as an advertising gimmick for Montgomery Ward stores in 1939. Families on this side of the Atlantic tell their children that Santa lives in Lapland, rather than the North Pole, but that seems to have been a similarly late addition to the Christmas legend, developed mainly by the Finnish government in the 1960s to boost tourism.

No one is saying that all modern creations are bad, of course, and you can like whatever you like. I’m simply saying that the actual customs that our forebears kept for hundreds or thousands of years disappeared quickly and recently during the Great Forgetting of modern times, replaced by less wholesome and healthy customs manufactured by people with agendas.

In fairness, this is the only time of year many Americans are exposed to classic movies like It’s a Wonderful Life; repetition has turned them into white noise, and they were of course mass media products of their own time, but they remain a window into a less wasteful past. Likewise, if people are going to read novelists like Dickens, recite poetry, visit family members or sing songs in a group, it will probably be around this time of year.

But here’s the thing: many of those things used to happen every day. People used to spend every day with loved ones, and singing and storytelling used to be normal, and while not everyone in every era read books or saw plays, they used to be far more common a century or two ago than now. Every day used to be more like the best parts of Christmas today.

Take wassailing as an example. Today a few people here and there still sing carols around the neighbourhood around Christmas, or even wassail -- like carolling, except that the carollers were invited in for drinks. Only several decades ago – in the time of motor-cars and electricity, and within the memory of people still living – it was much more normal, even in America. Here in Ireland, though, people didn’t just do it at Christmas, but all through the winter, in a union of drunken party, social gathering and prayer that has no modern equivalent.

Such customs broke up the long darkness of winter, kept families from getting cabin fever, and let them check on each other. It allowed each family share with their neighbours – food drinks and stories -- in a pooling of resources. It strengthened the feeling of community, so that burdens were lessened because they were shared, and joys were heightened because they were shared.

The other thing to remember is that there’s nothing stopping us from bringing back many of these older rituals, which we might find still serve their old purpose. Wassailing would be a great thing for many older people --- or young people, for that matter – who don’t get out much. Give it a try, offering snacks or cider as you go along – if one in a hundred houses lets you in, that’s one house that might join you next year. Most importantly, you’ve planted a seed for everyone who heard you, and made it seem more normal. It doesn’t have to stop at Christmas either – remember that the twelve days of Christmas ends January 6 – or just make plans for next year.

Try singing some of the older songs; if you are tired of hearing “Fairytale of New York” or “Santa Baby” for the thousandth time this month, try looking up the music or words for “Angelus Ad Virginem,” “Tomorrow Will Be My Dancing Day,” or other neglected carols from ages past. Alternately, try looking up different versions of familiar carols; “God Rest Ye Merry Gentlemen” came in many regional forms, from mournful to jaunty, before settling on our current version. For my part, I’ll talk to people about reviving Wren Day here, and see who’s interested. 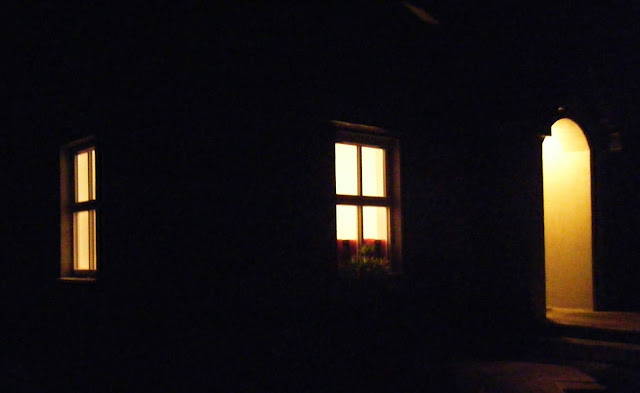 Wherever you are, your climate, neighbourhood and family will have your own customs – but look at what your grandparents, or their grandparents, did and what could be revived. Many of those customs, field-tested over generations, were more fun, and healthier for body and mind, than whatever the television’s telling you to do.