Our internet is down 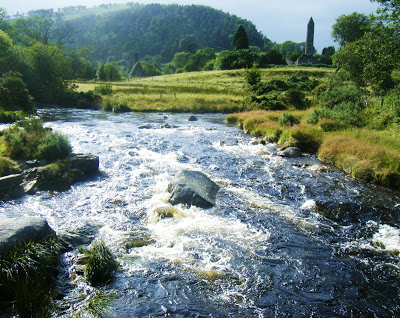 My apologies to those who have written to me; I'm not ignoring you deliberately. This just happens sometimes where we are. I hope to have internet again in the next few days.

Finally, if you're feeling as tense about the future as many of my friends, feel free to check out this piece I wrote on the alleged 2012 apocalypse scare. This time it's an election instead of a Mayan prophecy, but I'd say much the same.
Posted by Brian Kaller at 16:09

I feel much more tense about the future these days. due to actual events taking place right now, that seem to build to a climax of an unpleasant nature: war.
The drums of war are being sound ever more loudly, the tone of conversation is all about threat and defeating the enemy and the actual buildup of US military forces in Europe, especially the northern part, is being stepped up.

My apologies for the lateness of my response -- again, internet. You're certainly not alone, but it's important to realise that this kind of thing is nothing new. The US has had more contentious elections than this, the world has been much closer to disaster, and we're all still here.

I don't mean to be diffident about the real problems we face, but I remind myself that worrying won't help anything. There's a lot I can change around me, but the world will go its own way. What do you think?

All I see is that the politicians and media everywhere, but especially here in Sweden, spew out ever more ludicrous phrases and comments, showing that they have become completely detached from reality, that the polarisation of this nation is increasing, the tone of hate within every spectrum of the political scale is getting more extreme, that Sweden has no defense worth mentioning, the US is deploying planes and heavy equipment to the northern parts of Europe and that the Swedish and Norwegian army are conducting joint exercises with the USMC to "come to Sweden's aid, when the need arises". Note when, not if.

Yes, it is something new, since we now are all interconnected and interdependent, a condition humanity has never experienced before. If the conflict in Syria (and we have the South Chinese Sea as a possible second front) for example will get out of control, it will send the rest of the world in a cascading freefall. Conflict will erupt all over the globe, due to the omnipresence of military forces, disrupting logistics on an equal scale. And every "sophisticated" nation is dependent on those logistics for its own functioning. That will cause a total collapse of social order in those nations, since no or very little supplies will come in and next to no one is able to fend for themselves anymore.

That is certainly a possibility, I admit, and obviously the UK and USA have made a major course change this year, going in a new direction with an unknown result. How have you been preparing for the future?

My family and I have left the city, moved to a new country to live life in a rural environment, away from centres of likely large scale conflict. We have started adopting a so-called self reliant lifestyle, growing our own food, having bees and chickens and maybe some cows next year.
We are downscaling our life, dismissing hitech gadgetry where possible, learning skills of old that might/should prove useful in a failing, fossil fuel and electricity depending world. Whatever I learn I try to teach my children if they are interested. Skills like handling knife, axe and rifle, having livestock, processing firewood, preserving food. A huge learning curve for all of us in a short timespan and I am absolutely astonished to find out time and time again how we have been robbed of the relatively simple tools and knowledge our grandparent's generation had and how hard it is to get it back. Simply because much of both tools and knowledge are gone. We have no one to teach us, except an ever expanding library here at home and derelicted tools in secondhand shops and abandoned barns.
And that will be the downfall of the entire western society; the knowledge and infrastructure that used to be a failsafe or back up..... It no longer exists on a scale which society as a whole will come to need.