A world of value 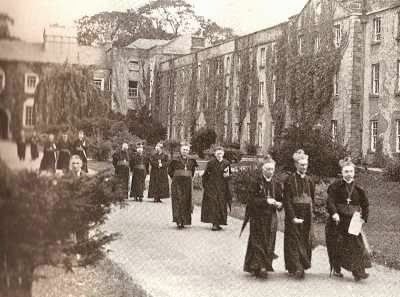 I spend each day's bus ride listening to old recordings from the archives of Irish national radio, including interviews from the 1950s, 60s and 70s. They are voices from a different world, when many Irish did not have electricity or cars, and local culture remained strong. So did the Catholic Church, and according to elders here, priests, nuns and monks were much more common sights, and much more identifiable.

Yesterday I listened, over and over, to interviews with Domincan brothers and other scholars in 1974, discussing the 700th anniversary of the death of Thomas Aquinas, and found myself fascinated by the depth of their knowledge and passion. The men whose voices I heard, as though sitting beside me, went to their graves long ago, as did most of the nuns I knew as a child. The world they represented -- almost two thousand years of scholarship and scholasticism, cloisters and sanctuaries, have almost disappeared now, and few people remember they existed, or why they had value.

As baffling as this sounds to most people, we need a world of monasteries again. We need a world of people who approach the Divine with modesty rather than flamboyance, who can live self-sufficiently even when the dominant culture collapses, who can practice self-control in all things, who believe in preserving the best of human knowledge for later generations.

"Aquinas begins by discussing how we can talk about God, and demonstrates that in a sense we can’t, because we’re trapped in our language and experience. The very structure of our language presupposes that we are dealing with our human experience and limits; our grammar and vocabulary walls our world.

Aquinas said that we should take the words as far as we can, and only when the words break are we led to the mystery. He famously said on his deathbed that all his words were like straw. But he understood that, and wanted to make the best straw a human could.

Few people remember what scholasticism was, but Aquinas saw it was vital in retaining human dignity. To Aquinas, the fact that we can logically demonstrate that we have something hidden in our being, something beyond all reason but essentially human, whether we are talking about a baby or an aged person, is what allows us to act as moral beings. It keeps us from being monsters. It is what allowed us to be capex infiniti – beings of unlimited horizons."

Brian,
I love that you wrote we need monasteries again places where people approach the Divine in simplicity and not flamboyance.We know the history of the monasteries and how they transformed Europe and other parts of the world by taking land that was considered not valuable and changing it into rich farmland. The fact that they also preserved culture and spread knowledge to the surrounding communities created centers of learning. Simple folk who preserved the best of who we are spiritually and in practical knowledge in how to live. Thank you for this. Fr Brian Flanagan

dear brian,
we are blessed to live close to two cistercian monasteries, one for women and one for men. they have been formative and are ongoing support for our choice to live a simpler, more devout life. when we can't make it to one of the monasteries, we have the sisters of mercy within walking distance. more monasteries? absolutely! they bring inspiration, the light of wisdom and prayer into the world. they bless us every day.