Christmas as it used to be 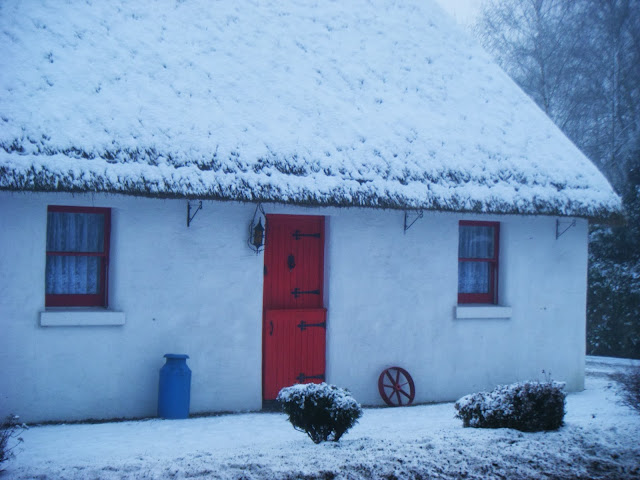 Before Christmas we trimmed all the manes and tails of the ponies, and would stuff the hair into pillows or saddles.  Around Christmas time the excitement began; on first good day in December white-washing was underway. Pictures from old calendars decorated the walls, or tin candy lids.

We were as good as gold the week before Christmas because we were told that “Holly Pux,” Santa’s friend, would be sitting on the chimney.

The shopkeepers had to look after their customers; everybody got some gift. Good ones got a brack and a red 1 lb. candle, others got just a brack, another just a red candle and so on. The men who got tobacco were taken very quietly down to the parlour or a glass of whiskey. It all added to the excitement.”

They bored a hole in a mangold to hold the candle, and everyone in the family was there Christmas Eve for the lighting of the candle. Christmas Eve was a fast day, with no meat; we had salted fish and potatoes, white sauce and butter, followed by tea and fruit cake. Santa only gave them perhaps an orange, a few little books, crayons and sweets, but the important thing was that Santa had come.

A week before Christmas my father killed three turkeys and a goose. He nailed pieces of wood together to make a box, and put the turkeys in it feathers and all. Then he put an address on the box and posted it to family in Dublin. In return we got brack and a huge cake the size of a motor car wheel.

Christmas used to be very different than it is now; if my parents had what we spend on toys they would have been rich indeed. A few days before the grocery boy arrived with the dray (cart) and a Christmas box, the ingredients for cake and pudding with a large candle in the middle.

Annie Dunne, Rathcoole, County Dublin, 1920s.
On Christmas Day, if the weather were fine we went for a walk before dinner. Our relations came to visit, and we played musical chairs with our cousins while someone played the piano.

We played tops, which you kept spinning with a little whip; hoops, which were old bicycle tires without spokes which you rolled along the road with a small stick; marbles, which were divided into large ones (taws) and small ones (mebs), and conkers.

The house was scrubbed before Christmas, the roof thatched and the outside whitewashed. The lining of the chimney was cleaned lest Santa be blackened, even though he rarely bought more than oranges and sweets.

The goose was plucked and killed beforehand, and left ready for cooking.

Christmas Eve was a fast day, but at 3 am we rose, dressed in Sunday best, and making our way by the reflection of the sea and the moon, we rowed our boat to the mainland and walked the remaining three miles to church. We stayed on for the three Masses Christmas morning, so joyous was the carolling and heavenly was the organ playing.

From No Shoes in Summer, a compilation of interviews from Irish elders in the 1930s.
Posted by Brian Kaller at 23:04

Fantastic! Thanks for sharing.