Tales from an island 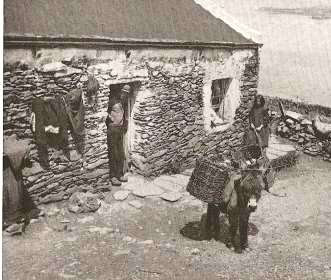 "Scattery was an island mile long by half a mile wide, and now largely abandoned, and in 1930s we 167 people who lived there were almost entirely self-sufficient. We brought in our own turf, we fished and in the winter we knitted and worked inside and listened to the radio.

Many people had left the island to travel the five continents and returned to teach the children .. our children were very intelligent, and the people were comfortable by country standards.

...on an island that small, there were four churches and a monastery. Most of the gravestones dating back hundreds of years have the same names as the people there now. When people walked to the graveyard they always took the long way around, so that you could take as long as possible. The wake the night before would take all night, starting with a single unmarked grave -- you started at that stone and walked to the low tide mark barefooted, and circled around to the stone again, and you did this ten times.

This island was the home of St. Senan, born in Kilaimer in 488, and his sister is also a saint- Saint Imy. His feast day is the 8 of March, the same as John of God. Once this church was the seat of the diocese, one that covered part of several counties.

After Senan there would have been a bishop on the island for about six centuries, until the 1000s, and for many hundreds of years no women were allowed on the island -- only once was one washed ashore, and she died soon after. When Elisabethan soldiers came there, though, they took the monks and murdered them all, drowned them at sea. The families that lived here in my childhood only lived here about four hundred years."

-- Memories of a woman who grew up on Inis Catheigh, or Scattery Island, in the RTE documentary "Scattery of Senan," from 1978. The island has been abandoned, the last of the families gone, for 44 years.
Posted by Brian Kaller at 07:41

Was the island forcibly evacuated, like some others? and if so, what was the rationale for that? or did the people just dribble away?

As I understand it, they dribbled away in the mid-20th century. At times one or two people lived there, but locals considered the settlement to have ended when there was no longer a critical mass of people there.

My mother was born on scattery,she has died now as many of the last of the inhabitants have with that the soul of scattery also goes.i am glad there are good people that are now trying to preserve the history of that great island.my mother moved to the u.k and this is where i was born and my mother taught me how to row a boat as child at my local boating lake,i can rowe a boat on a sixpence,and as a child in a urban city quite unusual,as was my mother.i am proud of scattered and hope to visit this island and lay some flowers at my grandparents graves .god bless scattery and its great sond and daughters

Thank you so much. Yes, we all need to preserve the history of such places. Feel free to keep reading the blog and I'll talk about many such places. Write any time.