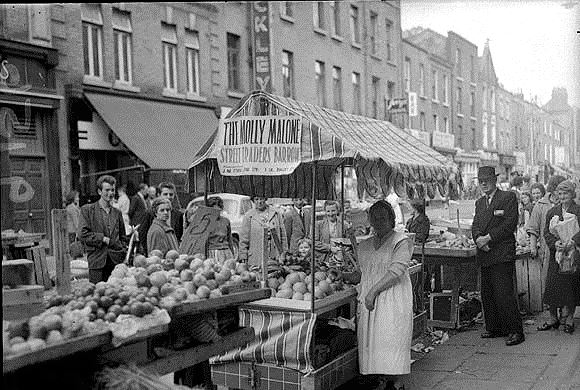 "When my mother started off here she used to go to the bacon factory with two of us in a pram (buggy) and used to bring the meat in the pram -- there were no pristine conditions then .... We were all brought in here from an early age -- my daughter comes in, she's nine now, but we started bringing her when she was two weeks old ..."

"We'd be selling the pig from its head to its tail -- we sell the crubine which is the foot, we sell the tail, we sell the bodice which are the ribs, we sell the real traditional Cork dish -- skirts and kidneys, which is a white stew -- we sell trotters and hamhocks, and we sell pig's heads."

-- Pauline Mulcahy, interviewed at the Cork market in 2011 by Radio Telefis Eireann.
Posted by Brian Kaller at 23:01