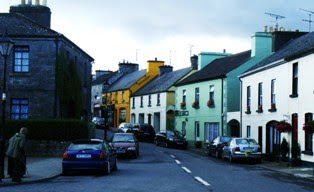 We just finished watching 1960s footage of the animal markets in Irish villages. It was a world many older people here remember -- even my wife, for such markets were still going on in County Clare in the 1970s when she was a girl -- but has almost vanished today.

At the markets, all the local farmers brought their animals -- pigs, cows and sheep -- to the village for buying and selling. Often the haggling was not done between simply two people -- a respected local man would act as intermediary, helping them reach an agreement -- sometimes even taking the hands of the two local men and touching them together repeatedly, encouraging them to shake hands.

More interesting were the faces of the farmers at the auction -- many would simply twitch, wink or briefly gesture with a finger, and the auctioneer would understand that they had bid.

The highlight, though, was watching the farmers load the animals into their cars -- of course no one had much money and few people had the animal trailers seen today. Instead, they would simply push them into their cars -- into the back of a station wagon with straw scattered around the bottom, or into the back seats. Most amazingly, one farmer managed to get a cow into the boot (trunk) of his car -- seemingly cruel, but perhaps more calming for the animal than riding in an open trailer.

We also saw footage of Aran islanders, still wearing their traditional hand-sewn leather moccasins and knitted wool jumpers, hauling a cow out to sea in a canoe. They were paddling out to meet a ferry that could haul the cow up by a rope and straps, but since there were no docks there, the cow had to meet them in the water.

It was obviously rough work, but it kept everyone in meat and milk for the year, and with little money or fuel to go around. Many struggling people today could benefit from sheep and pigs, to turning their grass and kitchen waste into wool and meat -- even city-dwellers could do so, as wartime Londoners did. Scenes like this could play out in suburbs today, or in the near future.

Photo: The village of Cong in County Clare. Villages around here seemed a lot more lively before everyone got cars and televisions.
Posted by Brian Kaller at 23:21

We picked up our latest goats from a nearby family as "rescue" goats... piled them into the back of our little Scion xB and went trucking down the freeway.. Goats staring out at the cars behind us.. who looked at us rather oddly..

Did I mention I am from a Irish family?... guess I don't feel so weird now :)