Sheep on the Curragh 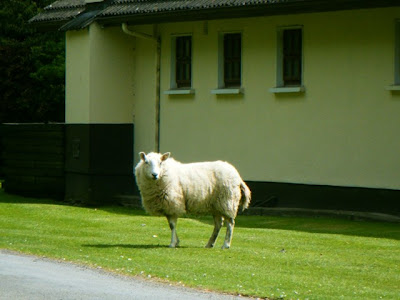 A few days ago, I talked about the village markets people used to have here, and thought I would explain where the animals came from. This is a sheep next to, I think, a meeting-house on the Curragh, used since Roman Times for communal grazing. Sheep, pigs and cows do not belong to massive agribusiness factories here; they often belong to smallholders, and you will see them in the space of a backyard. We drive past our neighbours -- some of whom own several acres, some small plots of perhaps half an acre -- and most have animals of some kind,

This used to be even more common a few decades ago, in the more traditional country that my wife remembers. A reporter on RTE, Ireland's main news programme, recently remarked that the large amount of green space in Dublin resulted from the large number of people who had cows or goats in their back gardens, and cattle drives from our county to theirs were being held into the 1950s.

Council estates, built by the new revolutionary government after the revolution, were the size they were so that every family could have their own cow. Indeed, that's how American suburbs began -- that's the point of having a grassy lawn in front.

Note the size of the smallholdings -- the postcards of Ireland show picturesque and empty fields, but some of these fields are less than an acre. My backyard in Missouri covered perhaps a quarter of an (only slightly different) American acre, and our next door neighbour's was larger still. Most American backyards I have seen could hold animals easily, and remove the need for a lawnmower.

My mother-in-law, who grew up amid the postwar ruins of bombed Frankfurt, said many families in her neighbourhood had goats, even though they didn't have the space to feed all of them. So the children walked the goats on leashes in the evenings, like you walk your dog around your streets, and it would graze the side of the road, the parks or vacant lots, or any number of other grassy spaces.

Neighbourhoods in wartime Britain kept pigs in a lot near their homes, and employed boys -- who might not have been able to find food or shelter otherwise -- to look after them. The kitchen waste from all the homes went straight to the pigs, who turned them to meat.

As more and more suburbanites struggle to pay the mortgages, animals might be a good way to keep the lawns mowed and meat on the table, if only people could get used to the idea again.

Such projects might require some cooperation among neighbours, if only in not protesting when you get your chickens, or in understanding that animal poo is actually a good resource. To keep animals together, as people did in wartime Britain, would also be a great benefit to many people in, say, my native Missouri.

Unfortunately, propose such a project and many people would look at you like you stepped off the mothership. There are no models for such neighbourly behaviour in any of our fashion magazines, our nightly television dramas, or any of our pop culture.

Furthermore, many in my country have a religious belief that neighbours can never work together; it's a theory called the Tragedy of the Commons, which states that, if farmers try to graze sheep in a field, each farmer will try to gain the upper hand, resulting in conflict and control by a few.

I grew up thinking the idea was from Aristotle or Marcus Aurelius, so widely did it permate pop culture, and so reverently was it invoked. I was shocked to find that it dates back two years before I was born, to 1968.

To the author of the Tragedy of the Commons, I present Exhibit A: The Curragh. Used for community grazing continuously for 2,000 years.
Posted by Brian Kaller at 21:30

It's interesting to see the differences in countries and regions. Here, near Springfield Mo. People often raise chickens, beef cattle, some dairy cattle, and horses. Some right into town. I know of a small pasture inside Springfield, where the owner keeps 2 horses. apparently legally. Here in Nixa, a guy across the street raises ducks and chickens. Down Main St,, a fellow keeps, and trades horses. Cattle pastures edge into town all around. But not many sheep, although I know one lady with several. Springfield's city council just recently voted to allow chickens, which I thought was really rich, if you drove thru some neighbor hoods in the morning, you could hear crowing coming from several directions. In the Ozarks, keeping chickens out of towns, has as much chance as keeping cars out of Detroit, it ain't gonna happen, it defies the gestalt of the place. A 2000 year old spot for grazing animals, now THATS sustainable!

I just discovered your blog through a link from the Energy Bulletin. As a former newspaper and magazine writer/editor myself, I think you're doing great work. Fascinating observations.

I live in a small city (just under 9,000 people) on the coast of Maine, and backyard livestock -- rabbits, chickens, ducks -- have become far more popular recently. Several of our largest cities have revised their zoning codes to allow small poultry flocks. I joke with my neighbors about fencing in our block and grazing sheep or milk cows, but the suburban lawn/flower garden culture is too deeply ingrained, I fear. I'm considered something of an odd duck already for growing vegetables in two raised beds in the back yard and heating with wood. I suspect that may change in the near future, given the reality of Jeffrey Brown's latest Export Land modeling.

Love the concept of the curragh. We have a park a block away that does nothing except grow grass ...

Hi, greetings from another ex-pat and sometimes blogger in County Offaly. Love your blog and while my village does not have sheep in the commons, grazing animals are quite common. We used to keep sheep ourselves but right now just have horses, dogs and cats.

There are cattle next door and most people here keep chickens.

I look forward to catching up on your back posts when it isn't 1am here in Ireland.

If you like, contact me and I get you my blog information, it really needs updating but you've inspired me to go back to it. Similar theme of North American lives for years in Rural Ireland, great to know there are at least two of us!

There is a local area of businesses that use sheep to graze down the grass. I think they're rented sheep or loaned sheep, they don't live there full time but just appear from time to time. I love the idea and hope it catches on for more businesses. I would love to hear the leaf blowers and gas-powered lawn mowers fade away.