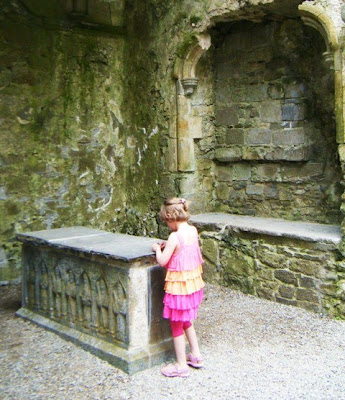 Photo: The girl at an altar in the ruined cathedral atop the Rock of Cashel.
Posted by Brian Kaller at 20:09

The Camphill movement is yet another example of an intentional community which strives to be self-sustaining.

During our time there we referred to it as being in a 'bubble'. Living off the mainstream grid could be another way of describing it.

I don't think most people would be willing to give up their privacy or individualism to live in a community where 'me' is less central than 'we'. It isn't easy but perhaps it's a small step towards true self-sufficiency or even a better alternate. Closer to mutual sufficiency.

This is an outstanding post. I noticed that Seymour had modified his views, and in later editions of his stuff, was praising the wisdom and the companionability of his neighbors more and more. This was right and fitting and I'm glad he did. Remember Metropolis: "Between the head and the hands must be the heart." What was shown there was the heart between the hands and the hands.