The Girl at the Beach 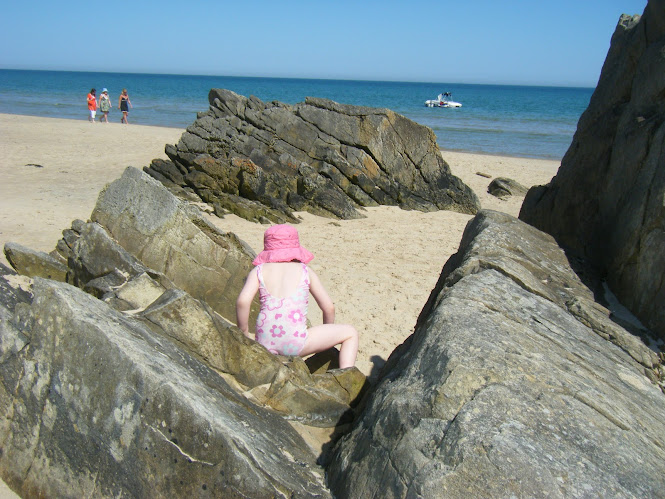 Irish television used to run a funny parody of "Baywatch," reimagining it on these shores. Tanned and sculpted lifeguards, that most popular image of America, tried to run across the shore to familiar power chords -- but as it was the Irish coast, they shivered in the drizzle, tiptoed over the horse deposits and did the hokey-pokey over the sharp rocks. "What works over there doesn't over here," said the voice-over. "But our beer does."

Soft beaches are rare as hot days on our windswept shores, so when I heard about a secret beach – public but surrounded by private lands – I saved the knowledge for the first hot day of the year. Sure enough, today we saw the temperature get to 25 degrees Celsius – 77 degrees Fahrenheit, what we in Missouri called “room temperature” but here was called “a scorcher.”

The Girl and I took my friend’s directions, parked the car in a secluded place, and crept through undergrowth on the edge of someone’s property. We emerged scratched from the branches, but blinking in the sunshine, facing the first beach we’d ever seen on this island.

We made sand castles, looked for crabs and sea life, inspected seaweed, and for the first time in my life, I swam in the ocean. We also discovered, tucked deep in the cliffs behind the beach, a waterfall, which formed a tiny stream that trickled towards the ocean until it sank into the sand.

Every night I read to her -- Pippi Longstockings, Winnie-the-Pooh, The Noisy Village -- and I encourage her to try as many words as she can. Tonight we talked about punctuation, and I explained that "!" was an exclamation point.

"I have an exclamation point," she said.

"Right here," she said, pointing to the scar where she was recently vaccinated.

Well, the ones on the paper are used when you feel something strongly, I said -- like when something hurts.

"My exclamation point feels like that sometimes," she said.