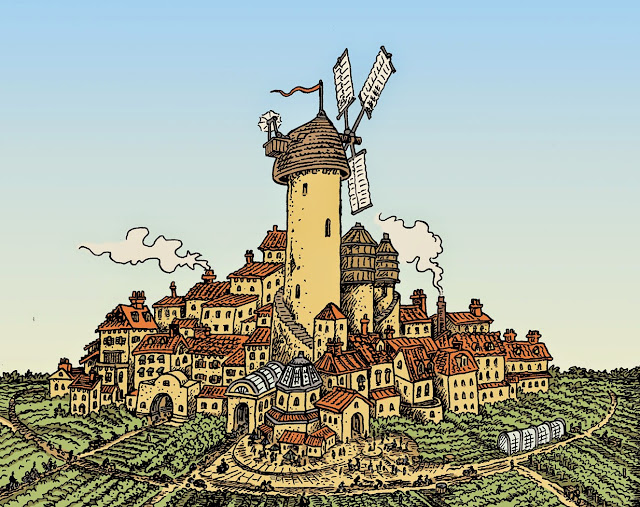 All futuristic fiction is really about the present; during the technological boom years of the early 20th century, writers extrapolated those trends into a space-faring techno-utopia, and when the social and ecological costs of that boom caught up with us in the late 20th century, dystopian fiction took over our collective imagination with increasingly horrific futures. I’m in my 40s, and almost no science fiction in my lifetime has ever predicted anything good for my future grandchildren.

Doomer porn, however, has limited appeal and shelf life; you can only get so miserable before there’s nowhere to go and no point. One of the most appealing subsets of speculative fiction, then, is what we might call the “good old future,” where our descendants have come through a crisis and created a better world that looks a lot like the past. I can personally recommend James Howard Kunstler’s World Made By Hand and John Michael Greer’s Retropia and Star’s Reach, and I have on my reading list similar works like John Seymour’s Retrieved from the Future, Per Fagereng’s Jack Moloney’s Century, and Ursula Le Guin’s Always Coming Home.

All these stories depict a home-town, human-sized, largely healthy future, and that’s exactly what we need to see right now. Most activism these days, on the left and right alike, warn that we only have a short time to stop collapse, and scream that “we” must do “something” or it will be “too late” – a message that is frustratingly vague, and leaves open the question of what happens when it’s too late.

What we desperately need are stories of people who roll up their sleeves and use their hands-on skills to fix problems. What we need is a wholesome depiction of sustainable, healthy communities that are able to do most of what our towns do now, just relying on the craftsmanship of their local working people rather than trucks shipping in supplies from Third-World factories. We need to meet characters going through their daily lives in a world that do things the old-fashioned way, and see that their lives are not very different than ours.

Oh, and to portray their urban landscapes and machines in vivid detail, this fictional future should ideally be drawn as a comic book.

Thankfully, we have just the man to do this in Ken Avidor, who has been drawing comics and illustrations about a sustainable future for decades, as well as covering the politics of his native Minnesota. Avidor illustrated the first article I ever wrote on fossil fuels some 15 years ago, as well as James Howard Kunstler’s web site. His comic strip Roadkill Bill lampooned our modern consumer culture, taking on subjects like obesity, rubbish, traffic and government spending – which doesn’t sound like the most obvious subject for a talking-animal cartoon, but Avidor made it entertaining.

Nothing he has done thus far, however, matches the ambition of Bicyclopolis, which uses the basic Back-to-the-Future premise of a young point-of-view character, an old and wacky inventor, and a time travel machine as a plot device to show off his design of a small-town, pedal-powered future in the Midwest USA.

In this future, fossil fuels have become more difficult to obtain – meaning not just less driving and flying, but fewer imported products, less infrastructure repair and intermittent electricity. Climate change has turned much of the American West into desert, and most people live in isolated settlements in oases. Bicyclopolis, founded by Civil War re-enactors and bike mechanics who had the skills to build a new world, is a plausible model of a self-sufficient community, and Avidor has fun planning the details of how such a town would operate.

In contrast to many writers who imagine a future devoid of technology, Avidor recognises that many modern inventions – pedal-powered gears and chains, for example – could be used to create windmills, water pumps, irrigation systems, vehicles and machines. Junk from the nearby rubbish dump furnishes them with metal that can be re-forged or melted and re-shaped into useful things, while plants like dandelions and milkweed can be made into rubber substitutes. His fictional village even has sports stadiums, bands and pubs, all using locally-made products.

Avidor’s creations have always been idealistic and instructional but never unrealistic or perfect; in the course of the novel Bicyclopolis endures a war with a neighbouring tribe,  sabotage by domestic dissidents and a crackdown on dissent. Many of his characters are limited or misguided, but always recognisably human; as strange as it sounds when describing a graphic novel, none of these characters are mere cartoons.

His fictional community also must deal with a future in which climate change has turned much of the American West into desert, and human garbage has continued to accumulate in dangerous floating junk in the oceans. The plastic rubbish on land gets swept up in the winds that whip across the now-desert landscape, so that travellers are hit by “bag storms,” whirling masses of bits of shopping bags and other bits of decades-old plastic.

Avidor inserts his own idols into his future, with writers like Kunstler, Dmitri Orlov, Jane Jacobs and Ivan Illich getting statues along the streets of his sustainable community. He does the same with his longtime nemesis and former Minnesota Congresswoman Michele Bachmann; he had written an entire graphic novel, “False Witness,” about her career, and here he depicts the villains as “Bachmannite militias,” and a “Bachmannite priesthood.” Some of his other villains look suspiciously specific as well, and I suspect would look familiar to anyone who knows Minnesota politics.

At a time when the media flood us with messages of despair, works like Bicyclopolis provide an antidote; a simple, earnest story of a believably sustainable town. It would make a good companion to World Made By Hand or Retropia for adults, or a good introduction to the issues for teens – some of the scenes of collapse or warfare would be a bit much for children. And while Avidor’s environmental concerns would cause most people to place his work on “the left,” he, like Kunstler or Orlov, does not fit easily into political boxes, and his depiction of an armed small town defending itself against imposed progress would resonate with many conservatives as well.

To see some of the artwork or order the book, go to http://bicyclopolis.com. 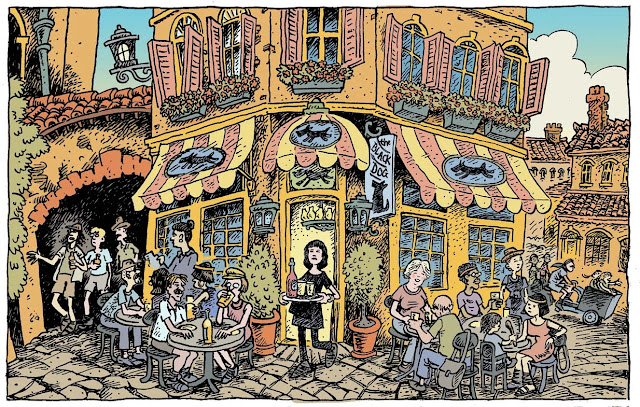