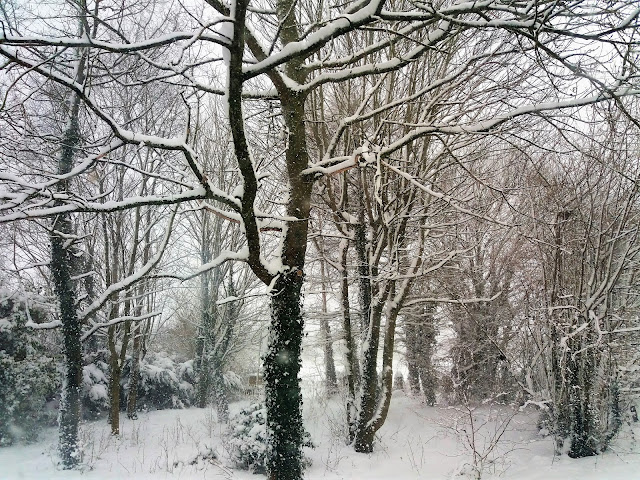 Seeking a change of atmosphere, I walked a few kilometres to the village this afternoon – not a difficult walk ordinarily, but more so in deep snow. Along the way I met my neighbour Caoihme (pronounced Queeva), walking down the bog roads to call on her neighbour, while her daughters were laughing and throwing snowballs with other neighbourhood teenagers a respectful distance behind.

“How’re you fixed for supplies?” I asked. We were well stocked for dried and tinned goods, and had enough vegetables to see us through these days when everyone was snowed in and the store shelves empty.

“We’re grand,” she said. “We have all kinds of supplies in the shed, chickens for eggs and neighbours to trade with – but not a drop of milk to be had for tea.”

“That’s what I’m going to see about in town,” I said. “Perhaps they’ve cleared the roads a bit.”

“Ah, I doubt it,” she laughed. “I sent Seamus (her husband) to the shop the other day to find anything that hadn’t been picked clean. He came back with a piece of cake and a potato.”

“Well, if they don’t have milk,” I ventured, “I wonder about Tommy’s cows? Do you think he milks them?” We have enough neighbours who raise cows, I thought, it seems a shame to let such a resource go to waste.

“Ah, I think he raises them for meat,” she said. “And none would have calves that had been weaned recently. You can try, but I wouldn’t go rooting around down there myself.”

We walked on a bit, saying hello to neighbours along the way and admiring their giant snowmen or other sculptures, and she checked on the horses along the way to make sure they looked healthy and fed. We talked about getting our families outdoors, and that drew us into talk of footing turf this year in the bog.

Turf, also called peat, is the remains of centuries of moss and other vegetation that built up in the bogs, which built up over the millennia when the submerged lower strata did not fully decompose. Draining the bog and pulling back the top layer of vegetation reveals black and spongy bio-mass that turns reddish-brown and hard when it dries, and creates a slow-burning, smoky fire when lit. For hundreds – probably thousands – of years it has been the main way people in this cold country kept warm. The smell of burning turf is one of the most distinctive things about this land, and in country homes and pubs alike here neighbours gather around turf fires in the winter evenings.

“Will you all be footing soon?” I asked. “We’ve skipped the last few years, as we’ve relied on firewood, but I’d really like to get a new load for next winter, and it’s already March.” I knew the man who owned that part of the bog, who sold the turf from it, saw a death in his family last year when his son drowned in the canal, and was in no state to do business.

“We surely will,” she said. “I’ll tell Tommy you’re interested, and you can come out with us. We’ll be putting our daughters to hard labour for the day, with their young muscles.”

“I might conscript my girl,” I said. “As of about six months ago she suddenly became a grumpy teenager and less enthusiastic about helping, but the air will be good for her.”

When I got to town there was no milk or any other staples, just as Caoimhe said – but it seemed like everyone in town had gone to the shop as well, not just to pick clean the few remaining items on the shelves but to chat and break the cabin fever. Some people had managed to get there by car, others by driving ATVs, tractors or even their horses – or just walked, as I had. At the shop I met my neighbour Jack, and talked about the strange weather.

“We’ve had cold snaps a few times before in the last century,” he said, “but in the last few years we’ve had the floods of 2009, the freeze of 2010, the floods of 2015 and now this,” he said. “It’s not anything we’re prepared for.” Nonetheless, he said, they were all well-stocked and used to living on very little, so they were able to take such crises in stride – richer or more modern people would be harder hit.

On the way I stopped at the pub, and many of the neighbours were crowding in there as well; one came in with his father-in-law, who insisted on buying me a pint, and I returned the favour. Many of us stop at the pub every so often, but are not regulars, so a gathering like this reunites people who see each other in passing but don’t get a chance to talk anymore.

Great community spirit, Brian. Thanks for sharing. I hope the snow clears for you soon.

I've been thinking of you and my other Irish blog buddies and wondering how you all are getting along. So wonderful the way you check in on neighbors, a great habit we Americans have mostly abandoned. I do hope the expected flooding this next week is less for Ireland than predicted.

Whenever I hear/read about footing turf, I think of the wonderful Seamus Heaney poem, Digging.

I also think of summer trips to Donegal to visit my family. I remember being sent out with my cousins and an aunt to deliver scone and tea to the men cutting the turf out on the bog. I have a memory of men with sleeves rolled up, sweat rolling off them, the sun high in the skin, the peaty smell of the bog, and their happy faces when we arrived with the tea and scone. Most of them stopped working and sat down on the backs of tractors or wherever there was a spot to sit and ate and drank before getting right back to work. All the talk was of putting the Yank (me) to work and of how long the sunshine would last. It was fascinating to me, as so much was about my trips to Ireland.