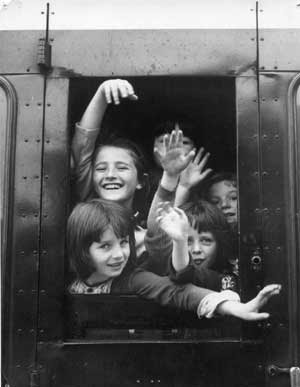 Recently I wrote about the memories of my elderly neighbours, and how they celebrated a childhood when people had no money, electricity, cars or conveniences. To many modern Westerners, including most of my fellow Americans, this sounds nuts.

Many Americans my age have never walked a day in their lives, much less barefoot, and they don’t need to check the weather, know any skills or directions, or check on their neighbours – they have little electronic devices that do those things for them. A life without smart phones, without electricity or tap water, without cars or malls, would seem like the most pitiable kind of misery, the condition you donate money to charities to lift people out of. Clearly all these people must be pranking us, or delusional about their own past.

To be sure, my Irish neighbours did grow up with a financial deprivation that most Americans can’t imagine. When we think of poverty, though, we think of inner cities or rural trailer parks, neighbourhoods of graffiti and boarded-up windows, rife with illiteracy, ignorance, addiction, abuse and violence. Yet the average Irish family in the mid-20th century made a fraction as much income as the average inner-city family today, and without the colour televisions or toys that modern families have. If they were that much poorer, you’d suppose, they must have been that much more miserable.

Yet most of the Irish elders I’ve talked to show exactly the opposite – by all accounts they grew up in close, loving situations, learning self-reliance and responsibility at a young age, without the insecurities and neuroses of modern kids. They didn’t even consider themselves poor --- and they weren’t, in any way that matters.

I’ve heard the same thing, either in personal interviews or in writing, from people who grew up in the USA in the Depression, or on the African savanna, or on a homestead in the wilderness. Even Americans who grew up middle-class in the 1940s and 50s, while not living the extremes of the Burren, typically had much smaller homes and far fewer possessions than their grandchildren do, yet were better educated, healthier and happier than most Americans today.

Of course, most people look back on their childhood memories – even the lousy ones – with a sense of nostalgia, especially as we get old; as our future grows darker, the past looks ever-brighter. Obviously we should take any such memories well-salted, and look for solid evidence. As it happens, we can find quite a bit.

Can we truly say how safe my elderly neighbours were in the Ireland of their youth? Such judgements depend in part on one’s own feelings, but we can compare some numbers; the entire country of Ireland, for example, had only seven murders in 1951, and in most other years that decade. Now that Ireland has been modernised, the murder rate has increased eight times, even when you factor in the population increase. In the USA, it’s 17 times higher, and in some inner-city neighbourhoods – the ones with more money and opportunity than the rural Irish had – it’s 430 times higher. We call both situations “poverty,” but they have little in common. (1)

Can we say how self-reliant people were? We can judge from their writings that small children then performed daily chores to keep their farm running, managed their own enterprises for pocket money, knew which wild plants and mushrooms were edible and poisonous, and took responsibility over all kinds of muscular tasks that would flummox most modern couch potatoes. That’s not to say that none of them ever got into any mischief, or that none of them took a misguided off-ramp or two along the road to adulthood. We can safely say, however, that not one of them spent their childhoods staring at a glowing rectangle, as generations of American children have.

Can we truly say how happy people were? Not entirely, of course, but we can say that suicides were rare compared to today; once Ireland was flooded with modern technology and Hollywood pop culture, the suicide rate rose almost 500 per cent – almost as high as in the USA. Earlier generations did not have our ability to satisfy every fleeting desires and indulge every impulse, and yet – or perhaps therefore – they did not seem burdened by the lack of meaning so many people feel these days. (2)

Can we say how educated children were? Perhaps -- in 1937, tens of thousands of school-papers from the 1930s were saved in Ireland’s national archives, many from one-room country schoolhouses, and they show children at least as literate as any in the USA today – and as cheerful as the elders they would one day become. Of course, schools and families varied then as now, but even at its poorest, Ireland’s illiteracy rate was only 14 per cent; that’s the same as the number of functional illiterates in the USA now, and we spend many times more money per pupil (3).

Nor was rural Ireland alone in this – the USA a century ago had one-room schoolhouses across the continent, the kind depicted in the books of Mark Twain or Laura Ingalls Wilder. Educators in the early 20th century surveyed schools in poor areas of Mississippi and Iowa, where most of the students also ran barefoot and the average family made less than in Zimbabwe today, and found grade-school students learning Shakespeare and Plutarch, agronomy and chemistry, French and Ancient Greek.

Don’t get me wrong; these times and places saw many injustices, only some of which have healed over time. I’m not saying we should emulate them in every way, even if we could. Nor am I saying their lives were better because of their poverty, for deprivation itself does not necessarily make people better – look at any poor neighbourhood in the USA now and see the quality of people’s lives. I am suggesting that people in Ireland generations ago managed to maintain a society that performed better than ours – that was as literate and educated, as healthy, and far more durable and far less energy-intensive – despite their poverty.

Today many people in my native USA are struggling; many of my friends are working several jobs to afford what they consider a decent life, a life with the same house, car and electronic pastimes as their more successful peers. I understand their decisions – they want to create the best life for their children, and to escape the debt that locks in so many of my generation.

Still, everyone thinks that to be happier in life, or to educate their children better, or be healthier, the solution is to get just a bit more money, so they pursue that goal more and more frantically, as they get older and sicker. I find it useful, and heartening, to realise that there were people who accomplished much of what I want in life, with almost nothing. Over the next few weeks, I’ll look more at what they did right.

Have you seen the documentary Older than Ireland? It's a wonderful documentary that looks at th last 100 years through the eyes of 30 Irish centenarians.

I've seen part of it so far, with plans to watch the rest! The subjects in the film are just brilliant.

They really are. They've all seen so many changes over their 100 years that it's mind boggling. It's easy to look at the elderly and think they don't know as much as we do, that they are not as on the ball as we younger ones are, but when you think how they've managed to navigate the changes of the last century, we should all be so impressed with them.

Have you seen Atlantic, the documentary about fishing in Norway, Newfoundland, and Ireland and how each nation manages the resources of the north atlantic. I haven't seen it, but really want to. I'm hoping you'll see it and blog about it ;-)

No I haven't seen Atlantic -- I'll put it on the list. Thank you!