No substitute for newspapers 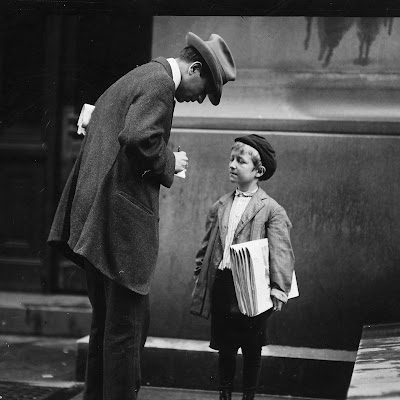 One of the few web sites I read religiously is the Archdruid Report, by John Michael Greer, celebrating its 10th anniversary this week. Some months ago he wrote a piece about newspapers, and I wrote back this comment:


This piece hits home for me, as I boarded that sinking ship of newspaper journalism in the 1990s, even as newspapers were shrinking their articles and redesigning their pages to look more like web sites.

Before my time, newspapers carried a vast range of information. Many had labour sections written for the majority of people who work for a paycheque, and not just a business section for investors. Some ran synopses of the Sunday sermons of their area’s most prominent religious leaders – important not just for piety, but for politics, as the local preachers and bishops had, and still have, enormous influence. Many came out twice a day, so people could read the news more often than most of us check web sites now.

Our modern culture tells us that we have more information today than anyone in history, because of the internet – but that assumes that data that could theoretically appear on a screen has the same value as words read from paper. In truth, few web sites will cover the library board meeting or the public works department, and if they do they are likely to be a blog by a single unpaid individual. Yet these ordinary entities shape our children's minds and our present health, and as such are infinitely more important than any celebrity gossip -- possibly more important then presidential campaigns.

Even if a blogger were to cover the library board or water board, no editors would exist to review the material for quality or readability, and the writer would be under no social, financial or legal pressure to be accurate or professional, or to publish consistently, or to pass on their duties to another once they resign. Transcripts of church sermons are even harder to find online, so some of the most important shapers of public opinion go unknown by anyone outside their circles.

I’ve worked on a number of issues with community activists in the USA, some left-wing and some right-wing, but no one wanted to associate with a church unless they belonged to one, and then only with their own. When I suggested to one auditorium of activists (left-wing, in this case) that they go to various churches and learn about them, I was actually shouted down; animal sacrifice, I think, would have earned less outrage.

Of course, as people readily point out to me, you can surf the internet and do your own research, but you must work diligently to winnow the accurate material from the dubious claims – anyone can create a web site that says anything. Moreover, most people are not going to do all that trouble themselves – we have lives, after all – and you shouldn’t have to. We used to have people who did that for us, and they were called reporters.

When I talk about newspapers this way, people often respond that we have made progress, for we no longer destroy forests. Of course some people used to harvest trees for newspaper and not replant them, but it doesn’t have to be that way – you could plant willow and get ten tonnes of wood to the hectare per year in this climate, and never fell another ancient forest of giant trees.

Contrast that with the mountains of coal we have to burn to feed server farms, the rare-earth-metal mining, the semiconductor factories and the global shipping that we need to employ just to create a mammoth server farm and global telecommunications network, all to do what we did with a piece of paper.

Once a newspaper was read, moreover, it had only begun its useful life – then it would be used to wrap gifts or groceries, then to line insulation or chicken coops, then as tinder for the fire, and the resulting ashes could then make soap or fertiliser. Once an electronic device has a single minor problem, however, it tends to go into a dump, with all its heavy metals and plastics, perhaps to contaminate the soil for thousands of years to come.

Computers are useful for some things, of course – I’m writing this on one, and you’re all reading this on another one. What I don't like is that we have come to depend on them entirely for everything else in our lives -- reading, organising, music, storytelling, faith, and general human interaction. Moreover, when everyone is doing this, we no longer feel the need to maintain paper records or photos, and even if we wanted to look at card catalogs or the telephone book, no such things exist anymore. We burn our bridges, and raise generations who forgot that bridges ever existed to anywhere else.
Posted by Brian Kaller at 13:20

"Once a newspaper was read, moreover, it had only begun its useful life..." Oh YES. (1) Newspapers served an obvious purpose in the late, unlamented USSR, in "the place to which even the Tsar goes on foot, rather than on horseback". (2) I am rather reliably informed of a goat, far to the east of the Urals, who was fed repeatedly and thoroughly on one of the two principal Moscow newspapers-of-record. You would think that ingesting all that ink would have hurt the goat, but apparently no. (I think the owner of the goat was in the Party, or something, and therefore got more newsprint coming in than most families would. He had to do something, and the goat - the kozlik - was his solution.)

But more seriously, you are right about the importance of newspapers even before they reach the privy and the barn. It is good to read your remark about sermons.

In a small community, at least in a prosperous country like Canada, one could look forward to seeing in the paper even minor bits of news, at a level which we somehow do handle in the same humane way on the Web: the 1960s Truro Daily News in Nova Scotia, for instance, remarking in a page full of local items that "Mr and Mrs NN are pleased to be visited again this summer, as every summer, by Mrs NN's cousin Effie from Sarnia, Ontario. Effie will once again be staying until early September."

in Richmond Hill, near Toronto in Canada

Toomas, I know a lot of small towns that continue to do the same thing, and I write for a paper like that myself. Most of what appears on the blog appears there first. Let's hope papers like that continue for decades to come.

This is not about newspapers as such, but an side branch of the idea alf writing things down on a piece of paper. My aunt Margaret (may she RIP) recorded all the births, deaths, and marriages in her parish in Donegal (and beyond, I believe, maybe to the surrounding villages). She could relate to anyone their relations and, as a result, was an oral historian for all locals and visitors. I remember visiting and marveling at the big book with her fine script detailing the lives of everyone in the parish. The lives of everyone warranted an entry - the man who lived 100 years and the baby who lived only a few hours.

One generation later and my cousins and I can't remember how we're related - is my granny your granny's cousin, that sort of thing. I think computers make us forget our hard written stories. It's too easy now to edit and erase and delete and lie. When Aunt Maggie was recording it all with ink on the page, it meant something.

Great observation -- our brains evolved for socialising and taking action, not swiping and clicking. We learn things more thoroughly when we talk to people, get their human stories, and feel pen touch paper. That's knowledge, and not just data, and it's actually recorded somewhere physical, not just as an illusion on a screen.