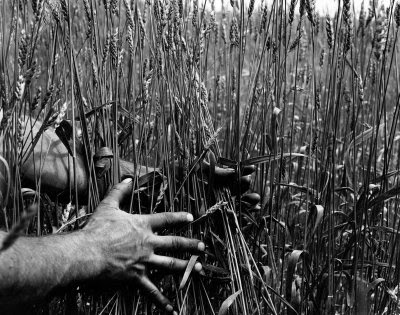 Since few things are more basic than food, it is heartening to see adjectives, like local, slow, organic and free-range creep into mainstream vocabulary. They don’t always come with a full understanding of the issues behind them – I have yet to hear a celebrity chef discuss Ghawar or methane clathrates – but at least the media culture seems to be moving in the right direction. There is one meal, however, that rarely comes up, in which most people continue to eat highly processed and unsustainable food – breakfast.

Cereal is the supermarket’s third most popular product in dollars, just behind soda and milk and just above cigarettes. The few corporations that make almost all cereal brands spend more money on advertising than does any other industry except cars.

Most of us grew up eating cereal every morning, possibly featuring one of the more than 1,000 cartoon characters designed solely to sell breakfast products. As adults, many of us continue to eat cereal, told that it is necessary to get vitamins or lose weight.
In fact, breakfast cereals are rarely healthy and never necessary. Most children’s cereal have far more sugar than any child needs – Smacks, for example, are more than half sugar. Even the less saccharine adult cereals are exorbitantly expensive for the amount of nutrition they contain.

When you think about it, a breakfast cereal is a bizarre product -- there is nothing natural or normal about eating manufactured flakes and puffs created by giant machines in factories, shipped around the world and sealed in plastic for months.

It’s probably not a coincidence that they were invented as the world was beginning to use fossil fuels in the 19th century. Fossil fuels allowed more food and a population explosion, fewer jobs on increasingly mechanised farms, and more jobs in increasingly polluted and overcrowded cities. Much of the new mass-produced food for urban workers was of low quality and questionable origin – according to author Otto Bettman, the New York Council of Hygiene reported in 1869 that the meat and poultry hung raw in stores “undergo spontaneous deterioration...becoming absolutely poisonous.” To use another example, city inspectors in 1902 found the majority of milk sold in New York was unsafe to drink.

Understandably, this combination of pollution, overcrowding, stress and near—poisonous food created many stomach problems, and the early industrial era also created a new moneyed middle class that could pay for cures. The first health food movement sprang up in response, with a mixture of common-sense advice, ridiculous junk science and competitive marketing familiar to most of us today. Health gurus touted the 19th-century equivalents of Echinacea or Goji berries, and one solution – made possible by the new industry and mass production – was breakfast cereal.

It wasn’t the only such solution – on this side of the Atlantic, it was cookies that were touted as indigestion cures, and they are still called “digestive biscuits” today. In America, though, health companies touted wheat flakes, and after decades of advertising they became normal and spread across the Western World.

It should be fairly easy to see that cereal cannot continue to be a part of people’s lives much longer: as energy and money grow tight, we will not be able to continue transporting wheat around the world and sending it through energy-intensive factories to be crushed, soaked, pressed and heated. We will have to do more traditional things with grain -- grinding into flour, sprouting, boiling – that served people before the energy window.

Finding out whether cereal is actually “part of a nutritious breakfast” is actually a simple process: Take the nutrition and price of a box of cereal, and compare it to a vegetable like kale.

Take as an example a common adult cereal I chose from the store. One serving of it is 31 grams for some reason, and contains 117 calories, but only 15 percent of your recommended daily dose of Vitamin A and 35 percent of Vitamin C. At my local grocery store, it is 5.49 euros, or 34 cents per serving.

A serving of kale is a lot more food – 130 grams – but has less than a third as many calories, at 36, and has 354 percent of your needed Vitamin A, 89 percent of Vitamin C, plus Calcium and iron, all for seven cents a serving. In other words, kale costs 79 percent less than breakfast cereal and 66 percent fewer calories, but has 2.5 times more Vitamin C and 24 times more Vitamin A.

Of course, that’s just one example: You can’t live on kale alone, nor would it be filling by itself, so scramble it with eggs and eat it with toast. Put it in bean soup. You use your imagination, and you get to practice cooking. If cooking is too much work first thing in the morning, you could make a nutritious meal the night before, and put it in the refrigerator along with your lunch. If you feel like being very organized, you could cook earlier in the week and make enough for breakfast and lunches all day. Finally, you could grow or raise all the ingredients yourself, in your garden, and get your food virtually free.

This seems a small thing, but all that cereal purchased means that it is part of the daily ritual for hundreds of millions of people, and we love our rituals – especially in the morning. Changing them creates stress, and the more changes we have to make at once, the more overwhelmed we will feel. We will be better off eliminating such unnecessary habits now, so that when major changes are forced upon us, our lives can continue as smoothly as possible.
Posted by Brian Kaller at 23:56

Cereal is certainly my big weakness, no question....tried to give it up several times and failed. Honestly, it would be easier for me to give up meat or milk! 50 years of conditioning will do that to a person I guess.