Around the corner from my office... 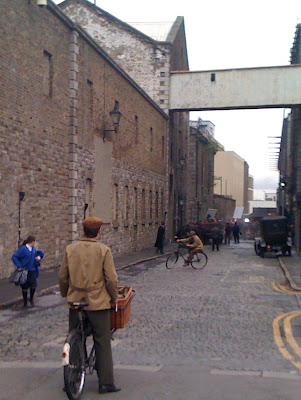 ... they were shooting a movie about the making of the Titanic, to be called Blood and Steel. The men on bicycles were apparently extras who rode around between takes.

While the cars and coats obviously date from a century ago, many men still wear the same caps and ride bicycles down the same cobblestone alleyways. Other parts of Dublin sport 21st-century glass buildings or 1970s slums, but these streets have changed little.
Posted by Brian Kaller at 22:43

I work in a antique store here in mo. We have a lot of Amish here, and one day 8 or 9 Amish women were in our store looking at old things, and they all set down on this large settle made in 1780, France, we have for people to set on in the store, and I had to blink twice. it looked like one of those old classic historical movie sets. Until one of them took out her cell phone.....

It always surprised me that the Amish were embracing mobile phones when everything from electricity into buttons are forbidden. What area of Missouri are you in, if you don't mind my asking?

Southwest mo. Ozarks, near Springfield, mo. There are several Amish communities around here, along with Mennonites. These are considered some of the most traditional of all Amish communities in the U.S, I understand. I guess people think that all Amish live in Pennsylvania and Ohio. But there are many in Mo. too.