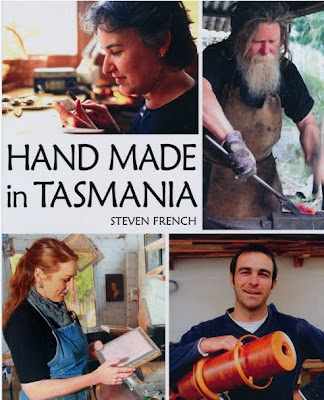 Nice looking book. As a furniture maker who works at a large antique store, and does repairs on furniture. some over 200 years old, this kind of book is right up my alley of interest. Thanks for the info, I'd have never heard of it otherwise. I hope iit's available over here. There are lots of craftsman here in the Ozarks, I like to hear about what others are doing elsewhere. You said you have desk thats 200 years old, what style is it in, if I might ask?

Thanks for the compliment. Where in the Ozarks?

The piece of furniture I mentioned is a sewing table that my mother-in-law bought - she's the one that knows antiques in the family. After I wrote this she corrected a slight error - it's Victorian in style and age, about 150 years old.

In the 1980s my partner and I organized a little cooperative magazine called Close to Home about craftspeople working out of their homes in the Texas hill country. It was very much like the book you describe.

It was good publicity for the artists, too. We put out a new copy every 6 months and everyone helped with the distribution.

This is a book I’ll have to consider buying!

Although Tasmania has problems with deforestation, I tend to think people who work in the handicrafts field are more careful about trees because they are looking for a quality that cannot generally come from clearfelling.

“Tassie”, as it is known here in Melbourne, has long had major economic problems, but when I look at the carbon crisis I know Tasmania has the best weather in Australia, the lowest energy requirements since carbon-spewing air conditioning is hardly needed, and a water supply the rest of Australia south of 19˚S can only dream of with futility. It is good to see something done to revive Tasmania’s economy - and an example others should follow if true!