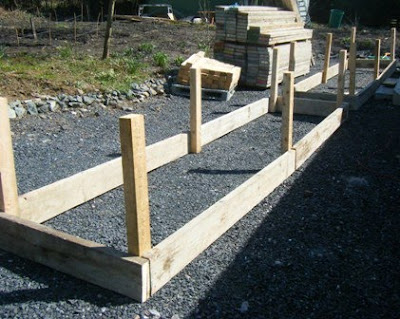 Gardening, always a popular hobby on these islands, has boomed in these touchy times: grow-your-own programmes seem to fill television schedules, and millions of people seem to be cleaning off the old tools in the shed and seeing what’s under their lawn. And good for them: if you have a big yard of deep soil, that’s what you should do with it.

Not everyone has such favourable conditions, however. Most people don’t live in the country, so maybe you live in a flat (apartment), maybe in a narrow row house, maybe you have only thin or contaminated soil, or only asphalt – ten percent of the arable land in the USA has now been paved over. If so, garden beds create an easy way to grow crops almost anywhere.

A garden bed can be as simple as a raised area in a boundary of sticks or stones, both for aesthetic reasons and to enclose the plants. We’ve built several of those in the last few weekends for our berries, herbs and salads, which don’t require deep soil. If you have asphalt or contaminated soil, or want to grow beets, however, you probably want 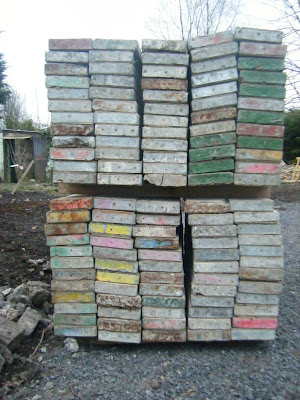 something deeper, and that probably means either bricks with mortar or wood planks, stakes and screws. We made the latter -- metre-deep, five-metre (15 feet) long beds – over the last few weekends.

We have an acre or so of land but needed beds anyway – for reasons of geography we wanted to plant in the field in front of our new house, but that’s where my parents-in-law’s trailer used to sit, and the ground had compacted into concrete. Plan B: put the garden beds back.

We needed wood, and that’s expensive these days – to create six five-metre beds we needed 1,300 euros ($1,600) worth of wood – not even counting the stakes we needed to secure the corners, a few hundred euros more. Luckily, we found a home scaffolding business only a couple of miles away, and he had plenty of planks that no longer met safety requirements for third-floor construction but suited us just fine.

To build the beds themselves we laid scaffolding planks two long and three broad across three of the stakes -- one stake held each end, and one more held the middle. We screwed the planks into the stakes with three-inch screws, and that was one side of the garden bed. Three more planks across each end completed the bed, so heavy it took four people to lift into place. We dug the topsoil out of the space where the bed would go, placed the bed in the space, and measured every side and corner to make sure it was level – where one side was too low, we wedged rocks underneath.

The next step was to fill the bottom half of the beds, not with soil, but with sticks – in our case, sticks my father-in-law and pollarded a couple of years ago, before his passing. The sticks serve many purposes: they drain the s 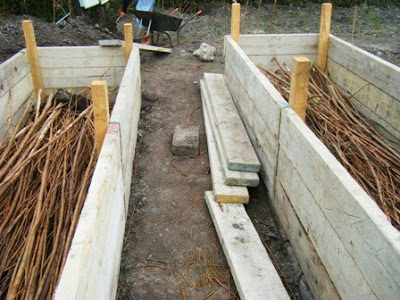 oil in this wet climate, and allow root vegetables to grow deeply into the space below. They take up the depth into which few plants would reach, so we don’t waste manure filling the bottom half. They can help form a barrier against weeds, which will not grow vertically through wood or air pockets. Stones or gravel would also suffice.

We ran out of willows on the last bed, and used some from the cherry tree we chopped down – we eventually decided that tree rot would not affect cabbages. We also used a few from the lilandia that ring our property – but sparingly, as they are evergreens and we don’t want soil laced with turpentine. By the way, never fill your bed with live branches, especially willow -- my mother-in-law did this by mistake, and spent years clipping out shafts of willow tree that kept popping up between the carrots.

Speaking of manure, we were lucky here as well – a farmer friend of ours had some horse and cow manure, two years’ ripened so that it smelled and felt like soil rather than poo – and was willing to truck it in. For weeks we’ve been the proud owners of a two-metre-tall manure pile that we have to ease the car around to get out the driveway, and we’re happily reducing the pile more each weekend.

For former car parks (parking lots to Americans) you can do the same thing. Last year my group, FADA, was looking for a community garden, and we acquired the rights to use a former car park behind an old church. There too we built beds a metre high – wheelchair height – and have used them for classes in everything from seed saving to food All this work and expense might seem intimidating – we could have used these hundreds of euros and weeks of work to just buy the vegetables in the first place. But that misses the fact that garden beds will last up to 20 years – my mother-in-law’s lasted 15 and were going strong when they were torn down – so this is constructing not just for ourselves, but for generations ahead.

As crowded as most cities and suburbs are, most of their space lies unused, and while Victory Gardens could spread across the backyards, beds could fill many lots, corners and crannies. They could fill the driveways of many suburban homes, where people don’t have a car or can park on the street. Small ones could be placed on rooftops or balconies if the structure can hold them – perhaps nourishing raspberries and other climbing plants that could creep down the side of the building, yielding food and reducing glare.

They could cover the parking lots of stores that have shut down, even as the glass storefronts are turned to greenhouse space. They could be set along playgrounds and schoolyards, providing entertainment for children and free snacks. They could be wedged onto roadsides and street medians – not growing food in that case, but plants that can suck up car fumes and make the surrounding air cleaner, as plane trees did the London smog.

Look around. What space – vertical, horizontal, roof, cellar, sewer, anything -- isn’t being used for growing food, or firewood, or raising animals, or keeping people warm or cool? Whatever it is, what could it be used for?

A Quaker in a Strange Land said...