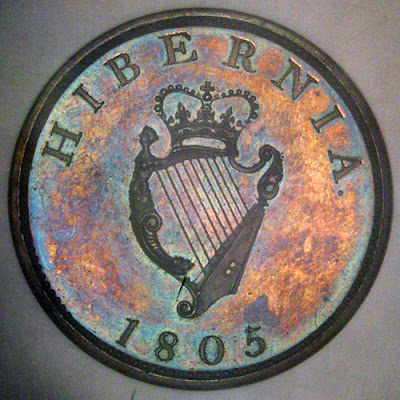 Wealth used to mean something you could directly use – food, tools, land. Later gold came to symbolise that wealth, paper notes came to symbolise gold, computer digits came to represent notes … until we get to Wall Street credit-default-swap derivatives, in which hundreds of billions of theoretical dollars can evaporate overnight without ever really existing.

As time goes on and the arcane world of globalised finance breaks down, we might have to rein in our wealth and return it to some tangible form. One way of doing this is to create a local currency, used only in your town or county.

Local currencies can be based on anything, just like national money. If we in County Kildare agreed to begin a local currency – say, the “Dara” – it could stand for one sack of potatoes, one kilo of wheat, one hour of labour, or whatever we choose. Such currencies were common in the 1700s and 1800s, and towns like Cloughjordan in County Tipperary are now considering returning to a local currency like they had 150 years ago.

Such currencies can be a way of keeping the wealth circulating locally, by putting it in a form that cannot be used outside of the local area. If all businesses in town are using the euro, then an international corporate chain could be sucking money out of the local area – by definition, if it is making a profit here, it is taking more money out than it is putting in.

If local businesses agree to use the local currency, though, they are encouraged to patrionise each other’s shops, and keep the money jumping from one person to another without ever leaving town. Money can enter the area through residents’ salaries or wages, but far less of it goes out again. This is one reason certain immigrant groups have thrived -- one study I read showed that Chinese-Americans used each others' small businesses so much that money circulated six times in their community before leaving.

Once currencies are established, local communities could extend the financial infrastructure with local banks or stock exchanges. The latter could be stock markets in the traditional sense – opportunities for local people to share the risks and rewards of their local businesses.

These ideas may seem exotic, but they were done before in Ireland, and can be again. Such local resilience would help in situations like the bank collapses last fall, and ensure that if anything happened to the global money supply, we would have a local back-up.

Photo courtesy of www.numismotography.com.
Posted by Brian Kaller at 22:31

This system has been running in England for about a year now, so it hardly seems exotic!

Lewes, I believe, started it and now Manchester, Brixton, Totnes are joining in to counter effects of the recession.

It does seem ironic though, that the Irish government is pushing for the ratification of the Lisbon Treaty and stronger links with Europe while many people are looking to support their local economy in a direct way.

How does it seem there to you, Brian, as the man on the ground?

King of the Paupers said...

"Local currencies can be based on anything, just like national money. If we in County Kildare agreed to begin a local currency – say, the “Dara” – it could stand for one sack of potatoes, one kilo of wheat, one hour of labour..."

Jct: Bingo. Sure, an IOU for potatoes or rice is nice but an IOU for an hour of time is so universal. When the local currency is pegged to the Time Standard of Money (how many dollars per hour of volunteer labor, children too) Hours earned locally can be intertraded with other timebanks globally! In 1999, I paid for 39/40 nights in Europe with an IOU for a night back in Canada worth 5 Hours. You can too.
U.N. Millennium Declaration UNILETS Resolution C6 to governments is for a time-based currency to restructure the global financial architecture.
See http://youtube.com/kingofthepaupers on growth of the international time-trading network.