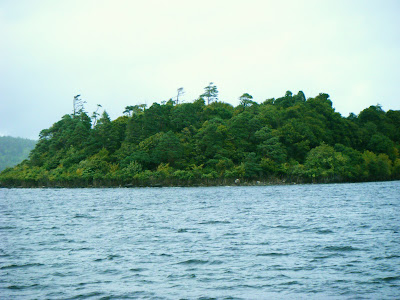 It occured to me that all Ireland, and much of Europe, Asia and North America, was covered with dense forests like these. I was also struck by how quickly everything returned to normal.
Posted by Brian Kaller at 23:23

That was the single biggest shock the first time I traveled in Europe - how deforested much of it is. I guess it shouldn't have been a surprise given the length of time that the population has been at such a high density. I vividly remember seeing Sherwood Forest and just being shocked at how small it is. A forest here goes on for miles and miles and miles to the horizon. It is very cool though to think how quickly these areas could reforest themselves (including the clearcuts here in the Northwest of the USA), given just some time to heal.

High population density, however, is hardly a sufficient reason for deforestation, however. If you consider that Japan, even when its lavish farm subsidies encourage the farming of land that is far too cold to grow rice, has even at a population density of 300 people per square kilometre less deforestation than Australia with only three people per square kilometre, the relationship is not so simple.

Moreover, the extensive deforestation in Australia (and global warming is making sure the remaining forests will become desert anyway, is not related to the fact that so little of Australia was originally forested. It relates to the fact that the free market provides no incentive to conserve in Australia (whereas it does in Europe, Asia and North America). Therefore, clearing over most of Australia is virtually complete and only the few steep areas remained in anything approaching pristine condition. Worse still, the extreme poverty of almost all soils in Australia's humid zones makes forest growth far more difficult.

Even in the Netherlands, with an average population density of 500 per square km, large areas are relatively thinly populated and forested, especially the coastal strip of dunes, the sandy heart of the country, and the eastern parts on the German border.
Nothing of it, however, is pristine oak and beech of medieval times. Those were all but cut down before the 19th century for ship-building and construction.
In the 19th century large stretches were replanted with firs, with respect to the growing of telegraph poles. Can you imagine! The remnants of these plantations are, for decades now, left to run kind of wild, and used for recreational purposes, mostly.
The big difference with genuine forests is, that they're criss-crossed with foot-paths and cycling-tracks with road-signs and waste baskets on every corner, and dotted with camping grounds.

The Dutch engineering spirit has mastered our natural environment. We tamed the waves, put the winds to work, and re-arranged the surface of the soil to our will and liking. We love 'nature', as long as she behaves herself, and doesn't baulk at the ancillary role we deem her proper. If we invoke her assistance to help us re-develop some waste land, we're in the habit of saying: Let's create here a nice piece of nature.
There will be a time, when she will re-claim her rights, and surpass our expectations.

I went fishing yesterday at a man made pond at the top of one of the hills of the Schoharie Valley in Upstate NY, and as I wandered down the path to the trout pond, I saw several old stone walls shooting straight lines through the forest.

I know it's a common sentiment to report that there are more trees in the North East today then there were a hundred years ago- but seeing the old farm walls lurching their way through dense forest is always a bit surprising.

Robin,
I agree – Europeans have learned to create less of a human footprint per person, but everything is footprint.

JP,
I agree, and that's a hopeful thing. Have you read Jared Diamond’s "Collapse?" He goes into the story of Japanese woodland cultivation, and that of other peoples who have successfully maintained their land.

Lagedargent and Anonymous,
It is not the real thing, I agree, but I'd rather have a bit of cultivated forest than none at all.

Jason,
I'd love to see your part of the country someday.

I'm not sure what your rules are on posting pics, or quite how large the below will display, but I thought I'd share it with you. This is from a bit south of me, in the Mid-Hudson Valley, in a forest in Ulster County. It isn't the most impressive forest wall I've seen, but I liked the way it seems to curve between the trees.