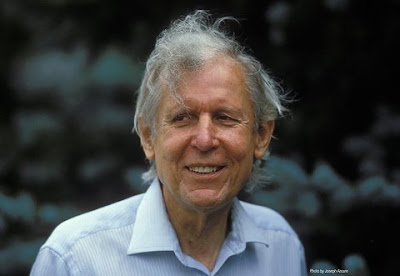 Berry was the kind of scholar and thinker that is rare in our age. He was beloved by many longtime greens, the farmers and activists who formed the Bioregional Conferences of the 1970s, for his works combining religious devotion with ecological understanding.

I corresponded with his sister in the last couple of years, hoping to interview him -- but many others wanted to see him as well, and his health was poor. There is so much I want to say about him, but the words don't come together. Maybe in time. Goodbye, Father.

This experience we observe even now in the indigenous peoples of the world. They live in a universe, in a cosmological order, whereas we, the peoples of the industrial world, no longer live in a universe. We live in a political world, a nation, a business world, an economic order, a cultural tradition, in Disneyworld. We live in cities, in a world of concrete and steel, of wheels and wires, a world of business, of work. We no longer see the stars at night or the planets or the moon. Even in the day we do not experience the sun in any immediate or meaningful manner. Summer and winter are the same inside the mall. Ours is a world of highways, parking lots, shopping centers. We read books written with a strangely contrived alphabet. We no longer read the book of the universe.

Nor do we coordinate our world of human meaning with the meaning of our surroundings. We have disengaged from that profound interaction with our environment inherent in our very nature. Our children do not learn how to read the Great Book of Nature or how to interact creatively with the seasonal transformations of the planet. They seldom learn where their water comes from or where it goes. We no longer coordinate our human celebration with the great liturgy of the heavens.

We have indeed become strange beings so completely are we at odds with the planet that brought us into being. We dedicate enormous talent and knowledge and research to developing a human order disengaged from and even predatory on the very sources whence we came and upon which we depend at every moment of our existence. We initiate our children into an economic order based on exploitation of the natural life systems of the planet. To achieve this perspective we must first make them autistic in their relation with the natural world about them. This disconnection occurs quite simply since we ourselves have become insensitive toward the natural world and do not realize just what we are doing. Yet, if we observe our children closely in their early years and see how they are instinctively attracted to the experiences of the natural world about them, we will see how disorientated they become in the mechanistic and even toxic environment that we provide for them ...

The difficulty is that with the rise of the modern sciences we began to think of the universe as a collection of objects rather than a communion of subjects. We frequently identify the loss of the interior spirit-world of the human mind and emotions with the rise of modern mechanistic sciences. The more significant thing, however, is that we have lost the universe itself. We achieved extensive control over the mechanistic and even the biological functioning of the natural world, but this control itself has produced deadly consequences. We have not only controlled the planet in much of its basic functioning; we have, to an extensive degree, extinguished the life systems themselves. We have silenced so many of those wonderful voices of the universe that once spoke to us of the grand mysteries of existence.

We no longer hear the voices of the rivers or the mountains, or the voices of the sea. The trees and meadows are no longer intimate modes of spirit presence. Everything about us has become an "it" rather than a "thou." We continue to make music, write poetry, and do our painting and sculpture and architecture, but these activities easily become an aesthetic expression simply of the human and in time lose the intimacy and radiance and awesome qualities of the universe itself. We have, in the accepted universe of these times, little capacity for participating in mysteries celebrated in the earlier literary and artistic and religious modes of expression. For we could no longer live in the universe in which these were written. We could only look on, as it were.

I had heard of Thomas Berry for a very long time, but I have never so much as glanced anything he wrote.

As a sufferer from an autism spectrum disorder and knowing how it effects me, I actually agree with Berry however when he says people now are autistic in their relationship with the natural world. That is especially true of people in Europe and East Asia where capitalism makes farming - the only use of their only natural resource yet I now know in geological terms an utter marvel - uneconomic because of the labour inefficiency of famring high steep mountain valleys where mechnisation is impossible.

The result of this is the virtual mechnisation of culture - seen in the huge mechanised farms on quite unsuitable land in Australia and in the robotic transformation of Europe and East Asia that is kind of echoed in the heavy metal and rap music that is now culturally mainstream in Europe.

That's an interesting point, that today's music reflects mechanisation. Even if Europe, though - and I'm sure in Asia as well -- there are people reversing the trend.