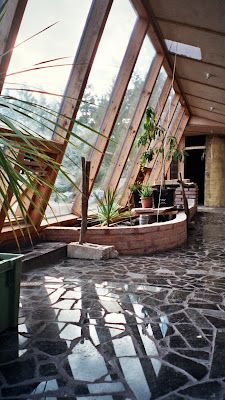 All of us live in homes that are dependent on larger systems to operate: electrical grids, heating and plumbing. Most of our homes require large amounts of energy to run, which we burn fossil fuels to acquire. We also have all kinds of waste products – tires, soda cans – that fill up landfills, never to be used again.

A few decades ago, however, one American began to think through, meticulously, how many of these problems could solve each other. Michael Reynolds called his solution the Earthship, a home built to be as efficient and self-sufficient as possible, using mostly free materials that are either natural or recycled.

To maintain a constant temperature, Reynolds planned for his Earthship homes to be surrounded by earth on three sides, usually built into hillsides. As the weight of a hill would make straight cement walls unstable, Reynolds created walls made of earth-filled tires, curved to allow the hill’s pressure to dissipate around the structure.

Tires turned out to be an inspired choice for building material – there are more than two billion old tires in the world, they do not biodegrade naturally, but they do hold earth well, and a wall of connected tires covered with a plaster can be very sturdy, earthquake-resistant and fire-resistant.

Reynolds also designed the top of the structure to catch rainwater to use for the household, and the buried sides to insulate the house. Other spaces around the front can be made with cement – but Reynolds likes to use old soda cans as filler, to make the structures lighter and to save money buying cement.

On the south face of the Earthship, Reynolds placed large windows under an overhanging roof, letting the low sun into the house in the winter when it’s most needed, and keeping the high sun out during the summer when it’s needed least. All day, the sun warms the interior walls and floor of the Earthship, which release the heat slowly over the cold night. Inside the front windows Reynolds recommends growing useful plants indoors, which can supply food and herbs and soak up wastewater from the sink and bath.

The effect of all this is a home that anyone can build themselves, using readily available materials, and that will stand up to time and the elements.
The Earthship concept grew by word-of-mouth, and now there are Earthships – using very little energy and largely off-the-grid – in almost every state of the U.S. Englan 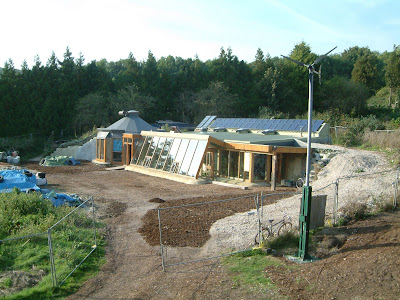 d just saw its first Earthships a few years ago, and the first Irish Earthship is set to begin construction soon.

If you are considering building a home yourself, look into the Earthship design – check out Michael Reynold’s books, Earthship I, II and III, or Google “Earthship,” and consider learning more about this ingenious method.

Photo used with permission of Gaia Engineering.
Posted by Brian Kaller at 23:33

I lived in Taos, New Mexico in the years when Michael Reynolds was getting started with the earthships and had many friends who worked on and lived in them.

I wrote about alternative living spaces for years and the earthships were probably the most successful of all the experiments that were taking place in the 70s and 80s. Being inside them is an interesting combination of light (all the south-facing windows) and cool darkness (the back side snuggled into the earth). It is a similar feel you get in the ancient Anasazi cave dwellings. Open to the sky, close to the earth. I was in one earthship that had ponds in front of the windows with fish swimming in them that were harvested for food.

I feel like we (as a society) got sidetracked, beginning with Reagan, and that whole fiasco is coming to it's just ending and we are going to go back and pick up the thread of where we were at in the 70s with alternative energy and sustainable life styles.

It makes me sad that we've wasted so much time and done so much damage but thankfully, hopefully, we can regroup and maybe really do it right this time.

Thanks for writing. I have been fascinated by Earthships for some time, and would like to learn more someday about making them.

I am sorry that all that interest remained on the margins for decades, but it wasn't a complete loss -- we gained a global community of people who were learning, testing new ideas and preserving old knowledge, and a great deal of our future might depend on their work.