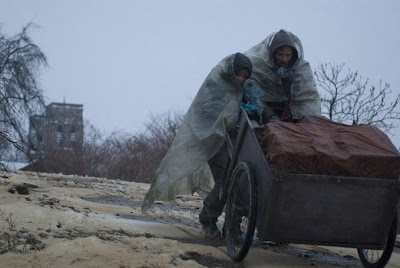 Hollywood has an enormous power over the public’s perception of the world – Gandhi is one of my heroes, but when I picture him, I’m picturing Ben Kingsley. We, for our part, want the public to think about and prepare for a difficult future. So when Hollywood makes movies about what the future might be like, we should pay attention.

Unfortunately, though, Hollywood images of the future tend to be pretty grim: most video stores even have a single section now entitled “science fiction / horror,” since any future they show is likely to be horrifying. Just the last few years have given us The Book of Eli, The Road, 2012, I Am Legend, Children of Men, 28 Weeks Later, Resident Evil, Terminator films and series, and even WALL-E, the first post-apocalyptic children’s movie.

None of these films are a particularly realistic future either, but some of them are fine stories (WALL-E) and some are not (Resident Evil). Last winter, in The Road and 2012, we got one of each.

The Road manages to be both a good film and a respectful adaptation of an almost un-filmable book. Unfortunately, more people likely saw the advertisements than the actual movie, and may have gone in with the wrong expectations.

The trailer begins with a grainy montage of stock disaster footage – lightning, hurricanes, tornado, volcano, forest fire, rows of police running towards an accident. Like many trailers these days, it simply makes up random stuff and claims it’s in the movie; none of the Extreme Nature scenes appear in the film, but were apparently intended to help this film piggyback the blockbuster opening of 2012.

Worse still, in one of those jarring trailer flashes to white-on-black titles and surround-sound thud, the trailer states, “10 YEARS FROM NOW.” The events in the book and film do take place several years after The End of the World, but it’s an abstract setting rather than a Nostradamus-style prediction. It’s likely the fault of the studio and not the filmmakers, but it cheapens the film’s impact and comes at a time when our culture does not need even darker fantasies.

You see, The Road is as dire a future as we can imagine without going into supernatural territory. Everything but humans have died – nuclear winter is implied but never named – and there are no plants, no animals, no life. The sky is cloudy, “like some cold glaucoma dimming away the world,” the land is covered by a thick layer of ash, and the forests are stands of blackened shafts that crack and fall one by one.

The remaining humans turned to cannibalism, of course, and the few left tend to be the ones who won the struggles. What distinguishes the main characters -- called only The Man and The Boy – is that they will not resort to this even when it means their lives. It’s the one moral line they can still refuse to cross as they trudge across a Pinteresque landscape of nameless wanderers and spare dialogue.

That doesn’t sound like an appealing story, but millions have found the Pulitzer-Prize-winning novel worthwhile – author Cormac McCarthy’s spare prose is so well-crafted as to feel weightless, and pulls the reader swiftly along a difficult path.

The filmmakers did well at translating this 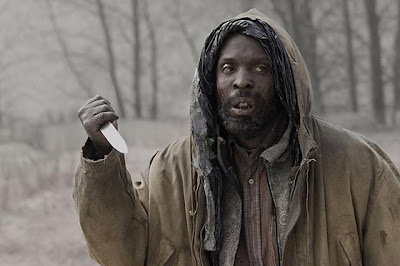 world for the screen: familiar faces like Viggo Mortenson, Robert Duvall and Guy Pearce are almost unrecognizable under the caked grime, and the soundtrack is appropriately spare. They adhered reverently to the book’s thin and episodic plot, refraining from any of the usual Hollywood moralizing, crowd-pleasing action or neat resolutions. If anything, they went the opposite direction and omitted the book’s most shocking scene, perhaps careful to stay away from the lurid territory of slasher flicks.

The world of The Road, however, is probably impossible: No one has ever experienced a real nuclear winter, but even a constantly overcast sky should allow for plants – greenery exists in the near-darkness of the jungle floor, and on the shadowy edges of caves. The cold should also not preclude plants: grass and willow trees survive in polar lands where it is far below freezing almost every day of the year and dark for six months, so the above-freezing rain described in the book should not kill off the world’s life. Nor would radiation: as Alan Weisman pointed out in his book The World Without Us, the radioactive area around Chernobyl has become a lush wildlife sanctuary. If anything, our sudden absence would produce a profusion of life that we currently kill off.

Even if all the green plants in the world died, however, there should still be mushrooms and insects, as writer Ran Prieur pointed out -- mushrooms are mentioned once in the book, insects not at all.

I nitpick these details to emphasize that this world is just Cormac McCarthy’s thought experiment, the logical extreme of his usual desperate men scrabbling across stark landscapes. Science fiction once teemed with such creative-writing hypotheticals: What if everyone lost their memory? What if a generation were born blind and deaf? What if all the plants vanished?

If The Road tries to be a personal story in a purely imaginary setting, however, 2012 is its opposite: a $200 million steaming pile of distilled absurdity with pretensions of prophecy, backed with enough budget to feed five Chicagos’ worth of starving Third-World children. The resulting slick package invites you to thrill as the romantic leads outrun a fireball, cheer as the puppy is rescued at the last minute, and sigh in relief as all rude and ugly characters die discreetly off-screen.

The story begins with scientists huskily explaining that “Neutrinos have mutated into some other particle!" What that could possibly mean is anyone's guess, but apparently "it’s affecting the Earth’s core like a microwave!” A later video exposition claims that some vaguely-defined thing causes Earth’s crust to shift every 640,000 years -- we see a cartoon Tyrannosaurus Rex saying, “Not again!” The narration then claims that 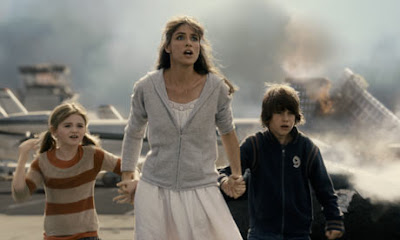 geologist Charles Hapgood believed this idea, that Einstein endorsed it, that the Mayans were the first to discover it, and that Christians called it the Rapture.

You can write a book with everything wrong with those few lines, but just to take a few examples:

• There really was a Charles Hapgood whose book was endorsed by Einstein – presumably mentioned because Einstein is one of the few scientists people know. As far as I know, though, Hapgood said nothing about 2012 or the Rapture – his upheaval theory tried to explain why the continents seem to have looked different in the past, before scientists proved that they move slowly. Einstein, for his part, was a physicist, not a mystical prophet.

• According to any Mayan archaeologist I have read, the Mayans never prophesized that the world would end in 2012 – according to some, in fact, they didn’t have a concept of the End of the World as we do. Even if they had, however, why should be believe something because they did? Should we also begin sacrificing human slaves to angry gods?

• The movie drops the Rapture name for extra points among the megachurch crowd, both in the script and in the callous poster tag “Will You Be Left Behind?” But the Rapture, contrary to popular belief, is not the traditional Christian idea of the End of the World; it is specific eschatology invented in the 19th century by a British sect leader named John Darby, popularized among hippies by Hal Lindsey’s 1970 book The Late Great Planet Earth and later taken mainstream by the Left Behind series in the 1990s. It is not even remotely what most Christian churches believe or have ever believed, and is just as New Age-y as the 2012 idea itself. 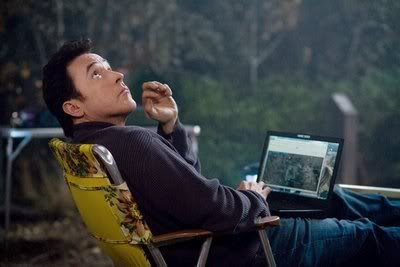 I could mention all the other bits of 2012’s disaster kitchen sink – solar flares, bubbling wells, volcanoes, tidal waves over the Himalayas (!), and large sections of Nevada dropping through the ground into … um … that giant void that’s apparently inside the Earth. But you get the idea – in the paragraphs above I just gave more thought to the premise than the filmmakers did or than millions in the audience are supposed to.

If this story were obvious fiction, none of this would matter – people are allowed to like escapist candy, and filmmakers are in business. But like the Left Behind series, the 2012 fantasy predicts something terrible happening to this, real world, soon. The only difference is that the Left Behind authors seem to truly believe something ridiculous, whereas the filmmakers seem to be transparently capitalizing on people’s fears to make money. They can claim the movie is mere entertainment, but they didn’t make up an original ridiculous movie like The Core or Volcano: they are exploiting an existing wave of paranoia in a troubled people.

I devote space to this because, as I mentioned at the top, Hollywood influences how we see the world, whether we like it or not. We deserve stories that deal realistically with what families might face in the years ahead, and that present a hopeful picture of what life might be like. If you think this can’t be done, that might be Hollywood talking.

So what kind of futuristic stories would I propose? More on that next week.
Posted by Brian Kaller at 08:38

That picture of the woman and the two children and the stuff about five Chicago's worth of starving kids . . . that is happening right now! How can people entertain themselves with this crap when it's happening for real in the world they live in?

I would never encourage anyone to watch horror or doomsday movies. When I want to be entertained and lift my spirits, I want to see something that encourages people to go in a good way. Imagine people leaving a movie theater shining with light spirits and smiles!