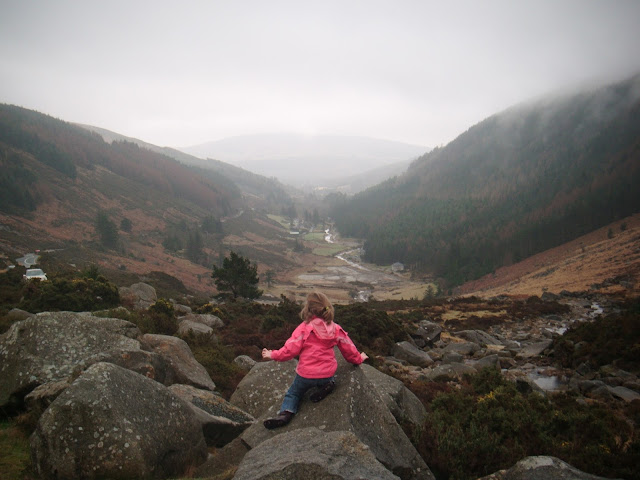 I talked last week about how children used to roam widely, and now tend to stay at home -- a trend that probably contributes to the rise in obesity and mental illnesses among young people. The fact that children stay home so much also means that they have little contact with Nature, that connection that keeps us grounded and healthy, and allows us to care about the world around us.

In his book “Last Child in the Woods” and “The Nature Principle,” US author Richard Louv coined the phrase “Nature-deficit disorder,” which comes from children no longer exploring woods or bogs and having adventures. Children who are obsessed with computer games or driven from sport to sport, Louv maintains, miss the restorative effects that come with the nimbler bodies and sharper senses that are developed during random running-around in wild places.

A University of Illinois study found that children with the symptoms of attention-deficit disorder were brought into the woods for a short time, and showed a marked decrease in their symptoms.
Drug companies will no doubt make billions prescribing medicines for problems that could be fixed by a walk in the woods.

“If when we were young, we tramped through forests of Nebraska cottonwoods, or raised pigeons on a rooftop in Queens, or fished for Ozark bluegills, or felt the swell of a wave that travelled a thousand miles before lifting our boat, then we were bound to the natural world and remain so today,” Louv wrote in The Nature Principle. “Nature still informs our years, lifts us, carries us. For children Nature comes in many forms – a newborn calf, a pet that lives and dies, a worn path through the woods, a fort nested in stinging nettles, a damp mysterious edge of a vacant lot. Whatever form Nature takes it offers each child a taste of an older, larger world, separate from parents. Unlike television, Nature does not steal time, but amplifies it.”

In a recent talk, Louv pointed out that we’re all still hunters and gatherers biologically, and there is something in us that needs to see Nature and be around it -- but many of us deal with it no more than we have to. He tells the story of going to a Nature preserve near where he lives with gang members from San Diego; they were big tough guys, he said, but they were scared – one said that there were two or three sounds in his neighbourhood and he knew what all the sounds meant. Here in the woods, he said, there were dozens of sounds, and he didn’t know what any meant.

Louv says that while Nature can be dangerous, we have to let kids experiment with that danger -- within reason -- and learn from it. A child who grows up never experiencing any danger is a child that doesn’t feel boundaries in the world, save those set by authorities.

When a child experiences Nature, they grow up to care more about protecting the environment, according to a new Cornell University study. The study published in the journal Children, Youth and Environment, found that while gardening helps kids care about the natural world, it doesn’t have as strong an impact as camping, playing in the woods, hiking, walking and fishing.

In such places, children create their own adventures, from toddlers pulling up rocks and seeing the creeping things underneath to the boys jumping over creeks, telling ghost stories and searching the lake for pirates. In the minds of children the most meagre and scruffy of woodlands can become a place of adventure, a chance to test their bravery and skills, a secret and dangerous place to gather with other children. A patch of land that most developers would consider useless and unproductive, will instead produce the best memories of childhood, if we let it.

In this age, people are more separated from the natural world than ever, and transforming it more than any society before us. Of course we can work to conserve energy, use less and defend our lands and the things on them, but there is one, more fundamental thing we need: to understand why these things are valuable, and worth preserving.
Posted by Brian Kaller at 07:03

Excellent post. The longer my husband and I live close to nature, and with farm animals, the more we see the reality of what these studies are finally "proving" scientifically. Nature is the only true reality, and we fear for the generations that grow up so disconnected from it.

Thank you! I fear it too, but they'll have to rediscover the real world at some point, under pleasant or unpleasant circumstances.

I should add that I don't judge people who spend a lot of their time staring at screens or doing other modern things -- most of us have to do so in order to keep a regular job and raise a family, including myself.

The same is true of children; I wasn't able to raise my daughter entirely away from modern media and electronics, and now that she's a teenager it's probably for the best that she has some way to communicate with her peers. I'm pleased, though, that she spent much of her formative years hiking through woods, riding horses and having adventures, as is the right of every child.

So well said and so frightening isn't it? A world of children too physically weak to climb a tree, too frightened of rain or storms to enjoy the season changes, too impatient to stand at the side of a pond and wait for that fish to leap forth again. We have six grandchildren now and every time one visits we get them outside to help with chores, to get dirty, to get wet, to carry a chicken, to get in touch with the world beyond all their "screens". They return home to environments filled with Facebook, video games and you tube videos, but hopefully they took a bit of our farm home with them.

Yes, excellent post, Brian. I was lucky to be born at a time when we as kids roamed far and wide. While I love my computer and what it can do, I've never left the love of the natural world behind. I applaud the way you've put a sold basis of nature lore into your daughter's upbringing.

Thank you for this, Brian! - Leigh, this is such a haunting and deep turn of words from you too: "nature is the only true reality". - Tom, currently near Toronto in Canada (http://toomaskarmo.blogspot.com)

Donna, I understand -- even if they only experience it in special moments with grandparents, though, perhaps those will be the memories that linger long after childhood.

Food, thank you! You were lucky. My daughter's leaning more toward the interest of her friends, and gets frustrated with my restrictions, now that she's a teenager, I'm gradually letting go as she gets older, but since she doesn't spend much time watching telly, and spends her spare time on horses or archery fields, I'm not too worried. :-)