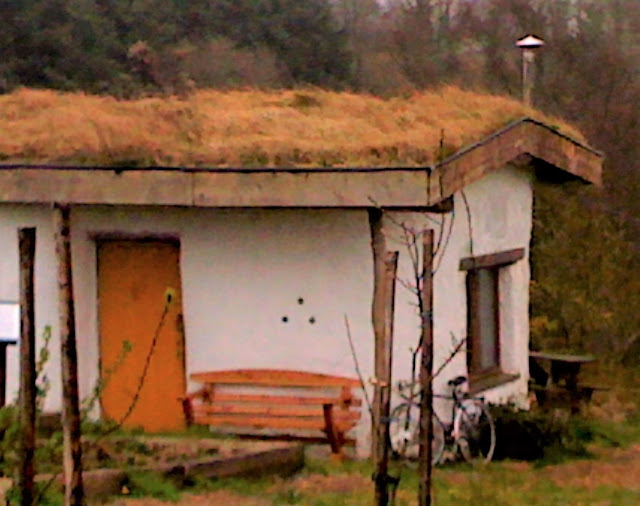 To appear in the Kildare Nationalist next week.

As a child I remember going to the city and looking out the window of a tall building for the first time, looking at the vast urban landscape spread out before me, and realising it was the ugliest thing ever made. The roofs, invisible to people driving down the streets, lay covered in bare gravel or nothing, with puddles gathering on them. It all seemed so unnecessary – why not plant grass there?

Others must have thought the same thing, for today people around the world are finding ways to take the wasted space on top of their buildings and turn it into greenery. Cultivating plants on your roof creates a patch of natural habitat, partially replacing what was destroyed to create the building in the first place, provides food for bees and other miniature helpers who will fertilise your garden, and helps insulate your home.

Green roofs come in many forms, the most ambitious of which are called intensive green roofs and allow for heavier weights and deeper roots of shrubs and annuals. These can combine water management systems that process waste water from the building and store surplus rainwater, and can allow the inhabitants of a building to grow anything but trees above their homes. Understandably, they generally appear in buildings made for this purpose.

The most popular and widely applicable type, though, is the so-called extensive green roof. To create one people generally cover an ordinary roof with some kind of lightweight plastic, like pool liner, and spread thin but fertile soil on top of that. The soil should be laced with grass and other seeds, and over the soil should stretch something to stop erosion until the plants grow – garden fleece, straw or some similar inhibitor.

We created a roof like this when we built a cob house in County Clare. Cob is a mixture of clay subsoil, sand and straw, and it makes a surprisingly good building material. After building the stone foundation, cob walls and wood roof, we unrolled layers of pond liner over the roof and rolled strips of grass right on. It’s still there today, and still works.

The plants should be drought-tolerant, as water will drain from them quickly, and should be hardy, as they will feel the full brunt of most weather. If the layers are lightweight, they can be added to many existing roofs without any additional structural support. Larger plants could be even better, of course, but most residential roofs will not support trees.

These roofs do not have to just carry grass, which is one of the hardiest of plants. They could carry wildflowers as well, which would create a striking cover for your home as well as fodder for insects. If you grew hanging plants like nasturtiums, you could even have the plants hang over the sides of your roof, creating awnings and shaded walkways in the seasons you need them most. The only disadvantage of wildflowers is that the flowers themselves might be short-lived, but the plants might be beautiful or advantageous in themselves.

Of course, even the thinnest green roof carries some weight, and not all roofs will be suitable. Most people aren't prepared to do this with their already-built house, so try it with your shed or chicken coop first, and decide if you want to do more; their roofs are also likely to be lower to the ground and less dangerous to work with.

Finally, even if you don’t grow anything on your roof, you could do other things with it. In hotter climates like Europe or the USA people often have dark roofs as they do here, which absorb heat and increase their cooling bill – many would do well to paint their roofs white. Other tenants of urban buildings are using their roofs for beehives, allowing the bees to pollinate urban gardens while steering clear of passing humans.
Posted by Brian Kaller at 17:41

It is in our plans to build an Earthship here (home made from tires) where most of the home is dug into a hillside and thus the roof is pasture for animals. These Earthships are popular in Arizona and New Mexico but not so much here in central Illinois. We love the idea of a green roof which offers shade, insulation and pasture but the county officials think we are nuts. They always do.

Excellent -- do you plan to build it yourselves? I love the idea of Earthships, but I understand they're not ideal for the rainy climate -- there's only one Earthship in Ireland that I know of. How much land do you have?

Someone near us wanted to build a cob house, but the county wouldn't let them -- so they built it secretly, hidden by hedges.

We have seven acres and yes, it can be wet here in winter, mostly frozen, but are plans include lots of moisture barriers between the earth and the tires, plastic pool liners have been used by some. Yes, we'll build it ourselves, we're in our 50;s but we have three stong sons who live nearby we hope to wrangle into the project. We'd like to be more secretive about it but farmers in this area hate anything new and different AND LOVE TO TATTLE TO THE COUNTY. Oh well, I love a good argument.