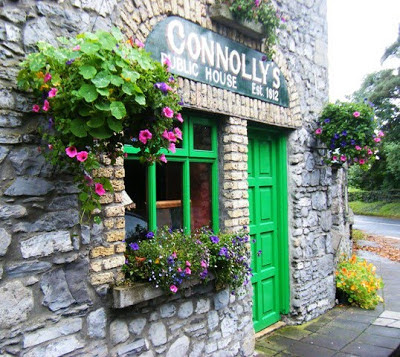 Some of you might know that I follow John Michael Greer's blog, The Archdruid Report, and have been enjoying his fantasy series on a near-future America with far less use of electricity or fossil fuels. Rather than presenting the usual post-apocalyptic world, though, he posits a world more like America in the 1940s -- "Retropia" -- and more pleasant than my native country today.


Thanks for another great installment – I’d truly like to live in Retropia. I can see small examples of countries or communities today doing what they did – Iceland, for example, telling the global financiers to stow it after the 2008 crash.

Ireland was isolated for a time after it gained independence – through a global Depression, a World War and a post-war boom, Ireland remained neutral and largely agrarian, and so was little affected. It was poor of course, even poorer than it had been under UK rule – as recently as the 1970s, the GDP per capita was lower than Gabon in Central Africa – but it remained a highly literate society, about as healthy as any Western country of the time. Once it got prosperous, a doctor friend of mine the average health went down.

I’m told that people were very sceptical of over-the-counter stores when they were introduced, as opposed to the old-fashioned kind of store where you simply ask for what you need and the shopkeeper hands it to you. The latter demands that you know what you need, and chat with a man who is also your neighbour; the former demands that you walk through aisles of goods designed to tempt you into buying more.

In the same way, I heard a radio programme from 1975 talking about something new introduced to Ireland, the “funeral-home,” as opposed to the family laying the recently deceased family member on the kitchen table and holding an all-night wake around them. The announcer described how Irish were resistant to the idea, considering it insulting to the deceased and exploiting the grieving family, turning their most intimate of family affairs into a business. Yet in both cases people adopted them, and people forgot things were once different.

The globalised modern world caught up with Ireland, and if Retropia were real I wouldn’t be so sanguine about its future. Once it opens up as a market, I’d be worried that companies will move in trying to get people to buy things they don’t need, like the hobbits adopting the machines of Old Sharkey in Lord of the Rings.

I have been following the Retrotopia tale, as well, along with the usual blog posts. It sounds like a great place to live, though the transition to such a place is likely to be painful. Even in Greer's narrative, Retrotopia exists after a second civil war. I hope the actual United States and other nations can make a smoother transition.