What else to do with rhubarb 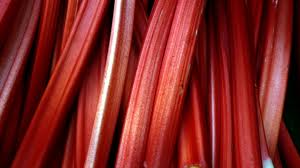 Before we casually shipped warehouses of vegetables across oceans and refrigerated them, spring was traditionally a lean time in Western temperate climates, a time when our ancestors had been living on things like salted meat or grains for months. The first edible greenery, then, gave food a much-needed injection of vitamins and flavour -- nettles, linden leaves, hawthorn leaves, sorrel, and most importantly rhubarb.

For this reason, early rhubarb – a vegetable that “thinks it’s a fruit” -- became an important crop for people who lived in far-northerly climates like ours, especially if you could “force” it to grow early and long. “Forcing” rhubarb involves moving the rhubarb into darkened sheds where they plants shoot upwards – reaching for the light, as it were – and the stalks grow long and tender. A tiny patch of Yorkshire, UK called the “rhubarb triangle” once produced 90 per cent of the world’s forced winter rhubarb.

Country people here frequently gave rhubarb away as gifts for visitors, and newcomers described delivering party invitations door to door and walking away with armfuls of rhubarb at each house. Many people’s knowledge of cooking rhubarb, however, extends only to one recipe -- the rhubarb crumble dessert.

Many other dishes are possible, though – savoury or spicy, by itself or as a sauce for something else. To make rhubarb you simply have to deal with its two central facts – 1.) it is very tart, and must be mixed with other flavours, and 2.) it disintegrates into mush when cooked. That still leaves a lot of possibilities, though, beyond the one dish everyone makes. For example:

Savoury rhubarb spread – take one strip of rashers (bacon), one stalk of rhubarb (about 80g) and two red onions (about 100g). Dice the rasher into small pieces and fry it for about five minutes or so until they are brown but not yet crisp.

Dice the red onions and put them in, or run them through a mandolin and break them up into slivers. Also slice the rhubarb with the mandolin, and mix the onion-and-rhubarb slivers together. After the bacon has been cooking five minutes or so, drain most of the oil out – save it for later – and toss the onions and rhubarb in the pan and mix them about. Add pinches of salt, black pepper, mustard powder and cayenne.

In about ten minutes the onions and rhubarb should cook down into a maroon paste; tart, savoury and spicy all at once. Once that is done you can spread the paste over crackers, as I did, or on toast.

Rhubarb-and-cucumber salad – The key to this is salting the rhubarb and cucumber to take the edge off the taste. Take one stalk of rhubarb (say, 80g) and one cucumber (about 150g) and peel the cucumber. Slice both thinly with a mandolin, put them in a bowl and add about 20g of salt. Let the mix sit for an hour or two, and then wash and drain the vegetables.

For the dressing, mix 200ml or so of some home-made yogurt or plain yogurt – “Greek style” works best. Chop about 100g or so of herbs – I used a mix of mint, dill, chives, parsley and Bernard – and mix them in thoroughly. Mix them with the cucumber and rhubarb, and you have an excellent salad.

Rhubarb salsa – Take half a stalk of rhubarb – say, about 50g – and slice it through the mandolin. Dice half an onion, also about 50g -- and a yellow pepper, of about 50g. Slice one jalapeno pepper in the mandolin. Keep them all separate.

While that is cooking, dice three tomatoes and toss them in, and turn off the heat. Chop up about 50g of coriander finely and toss that in as well, and mix everything together well. Add a teaspoon of Siracha sauce, or some comparable hot sauce, and a dash of garlic salt and black pepper.

Scoop up with nachos, crisps or toast, or eat by itself.

Also appearing in the Kildare Nationalist newspaper. Image courtesy of Wikicommons.
Posted by Brian Kaller at 07:33

I’ll have to try some of that. To your list I could add an excellent rhubarb sorbet, and I’m trying my hand at rhubarb wine! It’s currently still bubbling away in the cellar.

In solidarity with your article, I went ahead and posted about my own effort to make rhubarb wine. I can’t vouch for this particular process, but people say it’s all doable. I know you posted a while back about fermenting – did you ever try it with rhubarb?