The future of pavement

One of Ireland’s most iconic images, seen in many postcards and calendar panoramas, is the mosaic of green fields divided by stone walls. Those walls, so common in the west of our island, look even more interesting up close, for the stones are loose, irregular and often lain without mortar. They look as unstable as a card pyramid, yet many have lasted centuries. They demonstrate how insoluble problems can be combined into simple solutions, as farmers here turned an obstacle – the stones that broke their ploughs – into a barrier that would protect their livestock.

Such bucolic scenes seem a world away from, say, suburban USA, where rivers of asphalt and concrete flow through landscapes of strip-malls and housing estates. But there people actually have a similar problem as those farmers, and might learn from their solutions. 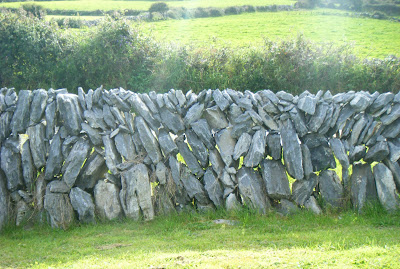 For hundreds if not thousands of years, most farmers had some knowledge of how to make walls out of the soil’s round stones, but I’m told specialists went from farm to farm to help with repairs. To build such walls you must select stones of the right size and shapes to fill the spaces formed by the ones around it, like a three-dimensional jigsaw puzzle. When laid properly, the gravity of the stones keep each other in place, like the segments of an archway.

Crafters made their walls in straight lines by hammering posts into the ground some metres apart along the path the wall was to follow, and stretching a rope tautly between them. They did not need to transport materials, as the stones were pulled from the fields around the wall itself – and stones have always been Ireland’s biggest crop.

The resulting walls seemed to grow organically out of the land, and with their crevices could be scaled by humans but made an effective barrier for livestock. Their crevices, meanwhile, provide a home for many forms of smaller wildlife we need for the larger ones to stay alive – the base of the food pyramid, as it were. Seeds eventually make their way to the crevices and sprout, and plants wind their roots and woody stems through the interstices until they become part of the structure, and the wall can barely be seen under the greenery. Eventually some of them become, effectively, hedgerows, and in some hedgerows you can still see their rocky foundation. 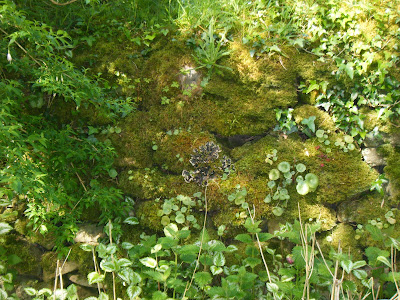 Smooth stones fill the earth here because a slow flood of ice scoured this land only ten millennia ago, ripping rock from mountain ranges and suspending it, up to a kilometre above the ground, for perhaps tens of thousands of years. When the ice melted, all the rubble suspended for a kilometre above any patch of land would have slowly tumbled to earth, some of it smoothed by millennia in an icy rock tumbler. Each new ice age would have added a new layer of till, until the soil was thick with it.

One other, more tragic factor might have accelerated the spread of stone walls, especially in the west where they take over from the hedgerows you see in our area. Humans began felling trees as soon as they reached this cold rainforest, but Ireland still had vast forested areas when it was conquered. Then the remaining trees fell to become much of Britain’s navy, until the land was the most deforested in Europe, as Ugo Bardi notes in his 2008 essay “A Distant Mirror.”

Trees hold soil in place; without them it washes away quickly, especially in a rainy country. Bardi notes that erosion seems to have been most severe in the west, and that the thinning soil exposed stones that were brought to the surface; even today, the further west you go, the more barren the land appears, and the more stone walls replace the hedgerows of our region. The diminishing soil, single-crop agriculture, high population and political oppression created an extremely unstable situation, which came, of course, in the form of the potato blight. Over the next few decades, the resulting Famine cut the population in half. 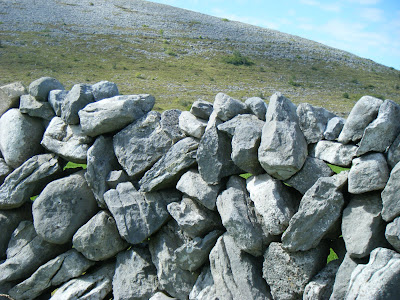 I study old crafts and traditions here to understand how people could live, and sometimes live well, in a truly durable way – and where they did not, to avoid their mistakes. In the modern West – and especially in my native USA – we have thousands of times the wealth that the Irish of 150 years ago, as well as devices they would consider miraculous. Our countries, however, face some of the same problems they did. Many of the forests have been felled, especially around populated areas. We rely heavily on single crops – much of the American diet now consists of corn, in the form of starch, sweetener and meat. More and more people are feeling an economic pinch, and while they have nowhere near the poverty of Ireland 150 or even 50 years ago, neither do they have any experience with the basic self-reliant skills that allowed many people then to survive.

Most of all, Americans specifically and Westerners in general have a problem very like that of the early Irish farmers – their topsoil is blocked by rock. Much of our land been locked away under cement and asphalt, and the more people live in an area, the more of their land is paved. Nor is the problem exclusively urban; suburban and rural Americans, for example, must live with mega-mall moonscapes of concrete and asphalt lining hundreds of thousands of miles of highway.

Such materials require a massive infusion of cheap energy to function, and as energy prices rose in the last decade, the cost of road surfaces soared. Such materials only last a couple of decades, and many roads are reaching the end of their lives. Rural governments in my native USA struggle to cover even rudimentary costs, and several localities are tearing up their roads for more cost-effective gravel. As other areas follow suit, they might find it advantageous to tear down berms, bridges, sidewalks, parking lots and strip malls. That would, however, leave those communities with thousands of tonnes of rubble.

Even residents who have scraps of land they could use for crops – say, suburban homeowners – often dig through their lawn and find thin, depleted soil filled with the debris from the original construction of the neighbourhood. One way or another, they will have to find some use for irregular chunks of concrete and asphalt.

At the same time, many American homes and businesses have chain-link fences for boundaries, which were only invented in the last century and whose cost will increase in the years ahead. How, then, do you discourage intruders or enclose livestock?

In an earlier article I mentioned hedgerows, which provide a thick barrier, a home for wildlife and a seasonal resource of shoots and berries. Many people with sufficient soil, a temperate climate and a bit of space could grow a hedgerow to surround and eventually supplant their existing fences. Hedgerows, however, have a few limitations. For one thing, they take time; even in a moist climate a row of willow saplings would take a few years to become a proper hedge. For another, they must have enough soil to put down roots – a problem for people with concrete or thin soil. 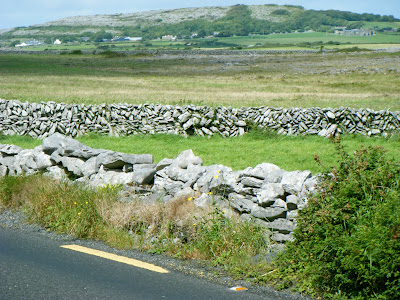 For many people, then, the best solution might be the same ones the Irish farmers used, to let these two problems solve each other. Chunks of rubble can be stacked into walls, and more easily than glacial till, as former pieces of road or parking lot are likely to have at least one flat side. They can keep livestock enclosed, perhaps in a single suburban block whose residents decided to tear down their chain-link fences and keep pigs together. They can break up the wind, shade lambs and piglets from strong sun, provide a home for the miniature wildlife that larger animals eat, and for the flowers that often grow in crevices.

If you think chunks of concrete and asphalt would look ugly, you could try finely chopping moss and mixing it with yogurt and beer, and painting the resulting smoothie on your rocks – I haven’t tried it myself, but I’m told it rapidly creates a moss covering. Alternately, you could plant ivy-leaved toadflax or some other flowers in the crevices, providing food for bees.

Given enough time, plants might wind their roots or stems through the gaps and you might get a proper hedgerow growing out of your wall, their fallen leaves and the animals’ waste slowly building back the soil.

Given enough time, that moonscape of parking lots could look like that green mosaic of our postcards.

Thank you. I've been a fan of Ran for quite some years.

It is possible urbanite may disintegrate over decades or centuries rather than millennia, but in that time it could also harbour a great deal of growth. I saw a tree here recently, perhaps only a century old, that literally grew to envelop a stone wall. The wall now runs through its vast trunk and comes out the other side.

I hope you keep reading.

What excellent writing! I wish more people could contextualize the seemingly horrendous and useless hunks of this world, and create such purpose for the maligned.

This is the first post of yours I've read, and shall read no less than one more. Thanks!