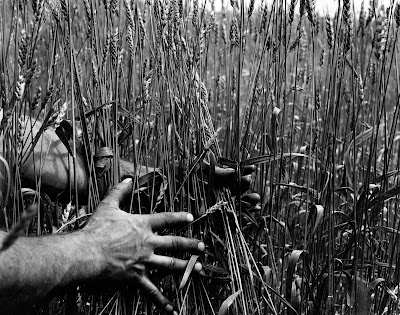 As the U.S. entered World War II, much of the food industry focused on the war effort. Farmhands were needed at the front, machinery for planes, and people needed to do more for themselves. A grass-roots movement spread across both countries to create “victory gardens,” and the idea was picked up by celebrities, politicians and the mainstream media.

Similarly, In Great Britain, 60 percent of food was imported when World War II began, and most of that food now had to be grown locally. Before the war, British farmers had gotten most of their seeds from abroad – then, suddenly, farmers had to save their own.

On radio programmes, magazines and movie newsreels, housewives were encouraged to preserve food in energy-saving, old-fashioned ways, like clamping potatoes under mounds of hay to keep them for the winter. Many used economical ways to cook food, like putting boiling soups in hay-stuffed boxes to slow-cook.

On both sides of the Atlantic, the victory gardens worked. They allowed most people to grow their own food, and spend less money. They put to work the precious space that is now being used simply as lawns or landscaping features. In a time when energy was scarce, they allowed more trucking and food to be used for the war effort.

Victory gardens meant that citizens ate better food – fresher than can be bought at any store, with the maximum nutrition and no chemicals. A now-forgotten 1977 Congressional panel observed that heart attacks and strokes went down in the war years, even with the stresses of war and a demographic shift toward the elderly – because of more fresh vegetables in their diet.

They ensured that millions of people became self-sufficient, and were insulated from the chaos of energy shortages and supply chain disorder. In the event of a crisis, every gardener mak 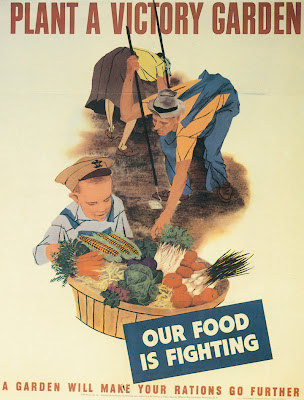 The gardens meant that people spent less money – the less money you need to spend on food, the more you can put away for paying the mortgage or eliminating the credit card debt. They created more beautiful neighbourhoods, gave people exercise, and brought communities together.

In fact, while Ireland never entered into World War II, the same thing was done here – council estates gave families as much land as a cow needed, and it was once common, I’m told, to see cows and chickens in many yards in Dublin. Most schools and hospitals here used to have their own gardens, and at the schools around here, they are rapidly returning.
Today, a new victory garden movement would do all these things and help us with new challenges like peak oil and climate change. Every boxful of vegetables you grow is one fewer that does not have to be shipped in from Australia. Also, building good soil is not just carbon-neutral, it’s carbon-negative, taking carbon dioxide out of the air and putting it back where it belongs.

Such gardens also reduce our dependence on fossil fuels, which are currently used to plow fields, make fertilizers, create pesticides, harvest, process crops and transport them to market. Gardens eliminate all those steps at once, reducing a 10,000-kilometre diet to a 10-metre one.

Writer and former Soviet citizen Dmitri Orlov wrote that most Russians had kitchen gardens, and that 90 percent of the country’s food was grown in such plots. Even though they were formed from necessity, because of the poverty of the nation and the incompetence of centralized agriculture, they ended up being a blessing – as the nation collapsed, the people could still eat. He warns that many nations in the West are now heading for a crisis, but are not as well prepared.

Could we feed ourselves? We have in the past, and with less knowledge and technology than we have now. Australian ecologist David Holmgren has estimated that his country’s cities could not only feed their own population, but become net food exporters, if the yards and golf courses were replaced by everything from leeks to cardoons to turnips. Presumably the same could be done in most cities in Europe and America. 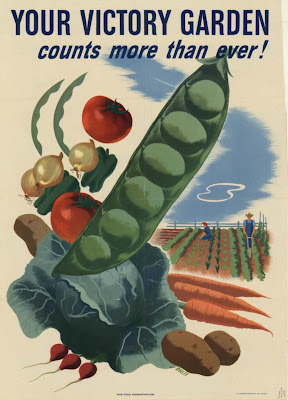 This is being done around the world, one plot at a time, as understanding of peak oil and climate change spread. It may not seem like much now, but it wasn’t much at the start of World War II either, and within two years – not much time to get a garden going – Americans were growing almost half their own vegetables. At the beginning of the war, however, it was crucial to have a critical mass of people already doing these things and who knew how, and who could teach others.

This is where we come in, we who are Greens / peak oil activists / traditionalists / crunchy cons / permaculturalists / whatever “ist” you like. We need to prepare, not just to grow our own food, but to be leaders during whatever shortage may arise. We need to save seeds for our neighbours as well, to lend our tools, to patiently teach and gently supervise people who might be panicked and angry. We need to walk among the world as it stands now, knowing that, however old we are, we may soon have to act like elders.
Posted by Brian Kaller at 23:20

We need to prepare, not just to grow our own food, but to be leaders during whatever shortage may arise. We need to save seeds for our neighbours as well, to lend our tools, to patiently teach and gently supervise people who might be panicked and angry. We need to walk among the world as it stands now, knowing that, however old we are, we may soon have to act like elders.

Nice to hear this coming from you - I was afraid I was being idealistic in believing that doing so would make a difference. A friend is stockpiling guns, canned food and toilet paper - preparing more for a zombie invasion than a food crisis. When I told him I'd protect our home by giving seeds to our neighbors and teaching them to farm, he just laughed. Love him, but he's such a Republican!